Only four out of 61 player­s with 100-plus Test caps are from Pakist­an — Younus is indeed part of a very select group
By Emmad Hameed
Published: June 24, 2015
Tweet Email 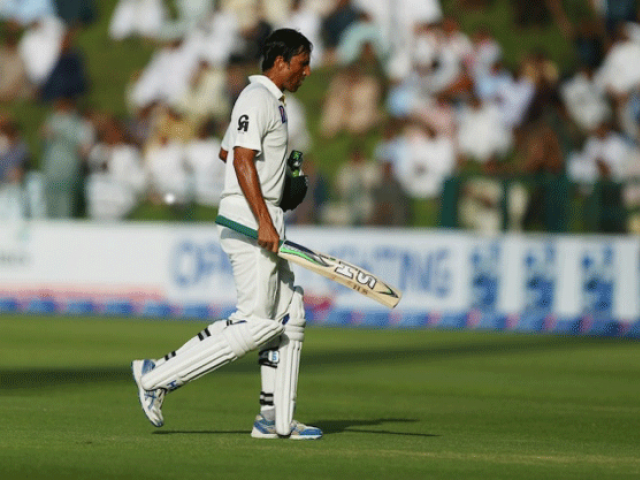 Statistically, Younus is at the top of the perch, a mere 238 more runs will take him past Javed Miandad as the highest run-getter. PHOTO: AFP

KARACHI: Rarely do Pakistan fans realise the value of their sporting heroes in their playing days. The legacy of Imran Khan, Jahangir Khan and Jansher Khan amongst a host of other was perhaps fully understood only once they left their respective sport.

One hopes that starting from today — the 100th Test of Younus Khan — Pakistan’s impassioned cricket fans recognise the talent, resilience, mental strength and the immense contribution that the Mardan-born fortress of batting has made in 15 incredible years since his heroic debut in 2000. Younus Khan drills one down the ground. PHOTO: FILE/AFP

Statistically, Younus is at the top of the perch, a mere 238 more runs will take him past Javed Miandad as the highest run-getter for the country in the longest format. His staggering tally of centuries (29) is already a Pakistan record.

Throw into the equation his incredible conversion rate (29 centuries and 29 fifties), outstanding fourth-innings returns (the only batsman to score three consecutive fourth innings centuries), batting average (53.71) and a triple-century to boot, even his staunchest detractor is forced to acknowledge that Younus is on the cusp of taking over the mantle of Pakistan’s best ever, if he hasn’t already.

The stats above are a mere selection from his outstanding resume. What perhaps can’t be quantified in numbers is the resilience of the man amid a host of personal tragedies and off-field controversies that Younus has had to endure. Younus Khan enjoying his time in the nets. PHOTO: FILE/AFP

Last year alone, a depressed Younus was forced to leave Pakistan’s ODI series against Sri Lanka midway after the tragic demise of his nephew. Over the years, the death of his father and the untimely passing away of his siblings have resulted in immense grief and torment.

But after every tragedy, Younus has bounced back with renewed vigour. The 37-year-old is the pivot for his family, and even his neighbours and old friends have Younus’ back in time of adversity. Moreover, the most underrated and unknown acts of the man include numerous charity causes and schools he has built single-handedly.

The straightforward and modest Pashtoon has been at odds with the Pakistan Cricket Board more than once, but luckily the board realises the immense value that his presence at the crease brings to the Test team. Younus Khan being himself after being dismissed for a single digit. PHOTO: FILE/AFP

The gleam in the eye is still visible as Younus aims to deliver more for the Test team. The recent World Cup might have been a tale of woes, but the Test returns have lifted him to the top of the pile. Pakistan must respect Younus and must celebrate his astounding landmark.

After all, only four out of the 61 players with 100-plus Test caps are from Pakistan — Younus is indeed part of a very select group.

While talking to ESPNcricinfo in an interview Younus Khan said: “It’s like a dream come true because I wished for it. When I started playing cricket only Javed Miandad and Saleem Malik had more than 100 Test [for Pakistan]. I still remember Wasim Akram playing his 100th Test, and also Inzamam-ul-Haq completing his 100th. Becoming the fifth one to do so, it makes me a happy and proud Pakistani.”

Expert opinion: What it means to be Younus?

Former Pakistan wicketkeeper Moin Khan: “Younus has been a thorough professional all his life. His conduct both on and off the field is truly remarkable. In my book Younus is the greatest Pakistan Test batsman ever. He has been a disciplined cricketer throughout his life which has enabled him to play for so long with dignity and honour.”

Former Pakistan wicketkeeper Rashid Latif: “Younus’ impeccable character is exemplary in every sense. He remained a fighter all his life and for him to sustain for so long is truly remarkable. He has always come to the fore whenever Pakistan team has been in trouble which has been a hallmark of his career.”

Former Pakistan batsman Mohsin Khan: “Younus thoroughly deserves this landmark (100 Tests). His record speaks for himself. He has served Pakistan as a great batsman. I hope he will continue to play for another few years. He has been a role model for all youngsters and his discipline has been absolutely tremendous.”

Former Pakistan batsman Aamir Sohail: “Younus has been an excellent servant of Pakistan cricket and it shows that he is playing his 100th test which shows his importance to team. The hallmark has been his tenacity despite the personal tragedies and professional hiccups he has faced throughout his career.”

Pakistan team head coach Waqar Younis: “Younus Khan is simply a legend. Scoring so many Test centuries for Pakistan is no walk in the park. He is an example for all you youngsters watching cricket.”

Australian Test captain Michael Clarke: “Younus is a very good player and has been for a long time. He’s one of the gentlemen of our game, a class player.”

Former Pakistan batsman Basit Ali: “It’s an honour for the entire country. In my opinion only a handful of players have put the country first and Younus is one of them. He might not have been the most talented but his hard work helped overcome all his flaws. I hope that he scales the 10,000 Test runs mark as well.”