Knock out: Hazaras toughen up with martial arts training

Knock out: Hazaras toughen up with martial arts training 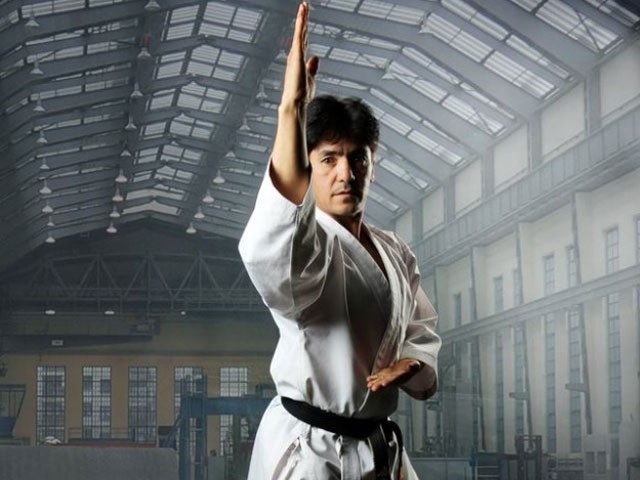 Dressed in immaculate white karategi, disciples fold their right arm above their forehead and thrust their left arm forward, open palm with fingers held firmly together. Their poker faces and agility is captivating. It is not just the features of Bruce Lee that the Hazaras of Quetta seem to have in common with the Hollywood superstar, some can also pack a punch like the maestro. Hazaras belong to the Shia sect and are frequently targeted owing to their distinct and recognisable features. In January 2013, over a 100 people died in a deadly twin bombing in a predominantly Hazara populated area of Quetta. The community then took matters into its own hands and, in an unprecedented act, protested along with the bodies of their loved ones in the freezing winter. The Balochistan government was overthrown, but the attacks didn’t stop.

The resilient community, as a result, is making arrangements for its own protection. Sensei Ghulam Ali Hazara along with his students at his training centre.  PHOTO: MOHAMMAD ZAFAR

The Hazara youth in Quetta has taken up self-defense training, taught by sensei (Japanese for ustad or teacher) Ghulam Ali Hazara. Though mere kicks and punches are no match for the heavily-armed militants and suicide bombers who have obliterated thousands of Hazara lives, the boost in self-esteem that comes with martial arts training can be crucial to keep one from resigning themselves to their fate.

Like in every sport, it is often up to the trainer to bring out the best in you and the Hazaras in Quetta are fortunate to have a two-time gold medalist as their coach. Ali came out at the top in the 2004 South Asian Federation (SAF) Games in Islamabad and in 2006 in Sri Lanka, after which he decided to open up a martial arts training institution to empower others in his community. “I spent all my prize money to build Ghulam Ali Sports Complex and finally succeeded in 2007,” says Ali. He had started offering classes in a rented building in 2004, but bought his own premises in 2007. “We can’t do anything in front of the guns,” explains Ali about the endless prosecution Hazaras face because of their faith. “But if armed men are near, we can use martial arts for self-defense.” Around 250 students, including 80 girls, are presently being trained in taekwondo and karate at Ghulam Ali Sports Complex. Ali says learning the skill boosts confidence. “Many are now interested in the sport. People from the Hazara community, especially girls, are learning it for self-defense,” says Ali, who draws inspiration from his idol Bruce Lee and is mindful of the discipline and respect of a sinsei. “Training is free for the poor,” he shares. “But those who can afford it, pay Rs400 a month.” But self-defense techniques for personal protection are not the only thing on Ali’s mind. Along with the top honour in the SAF Games, Ali also secured a silver medal in 2010 in Dhaka and trains his disciples to be competitive and participate in tournaments. “The Ghulam Ali Sports Complex is producing national and international level players who are training to clinch gold in competitions,” says Ali. Around 32 players from the institution have been selected for the Wapda, Pakistan Army, Railways teams in the national games in Lahore, he adds. The sport has always been part of a thriving subculture in Quetta. China Market in Liaquat Bazar was once teeming with posters of Bruce Lee and other popular martial artists. Shah Brothers was one such shop. The establishment, however, no longer stocks or sells these posters, says its owner Syed Jalil Agha. According to the 25 year old, people now give printing orders for images they download online. Most orders come from owners of sports clubs who want to decorate their walls with icons to motivate their clientele. Teenagers too have stopped picking posters off the shelf to stick on the walls of their bedrooms, but this hasn’t stopped them from emulating their heroes. Rehmatullah, 19, started martial arts training in 2006, when he was just 11.  PHOTO: MOHAMMAD ZAFAR

Twenty-year-old Shahida is one of the girls being trained at Ali’s institute. She has won the under-16, -17, -18 and -19 national level competitions and remains unbeaten till today. Presently, she is aiming for an international accolade. Shahida says she came to the academy in 2006 to get her brother admitted, but developed an interest in martial arts herself. “Martial arts is important for us … for our self-defense, as Hazaras are being targeted every day,” says Shahida, admitting that Ali is a great leader. The third-year student adds she often misses classes at college to attend national camps to train for events. “I am also training girls here at the Ghulam Ali Sports Complex to make Hazara women strong, confident and capable of self-defense,” she says. Moreover, according to Rehmatullah, 19, who started martial arts training in 2006, when he was just 11, “I want to work for my people who are living under immense pressure in Quetta. I have won 10 titles at the national level and want to be a champion like my teacher Ghulam Ali Hazara.” However, not all Hazaras who take up martial arts training are looking to for a skill to defend themselves and their community. Fatima Batool, who has been learning to land kicks and punches since the last two years, says, “I want to serve my country at the national and international levels.” She won a bronze medal at an event of the DG Rangers in Karachi and is hoping the sport will pick up in the near future. “We are facing a lot of problems due to the law and order situation as our events have been cancelled and lots of great talent is being wasted as a result.” Another student Nag Bakht, shares a similar aspiration. Bakht, who started training two years after being inspired by Chinese and Hollywood movies, says, “I also want to be an Olympian”.

In the Olympics, however, martial arts are now governed by a set of rules and players often end up bloodied and bruised. But it was not always this way. Once, the only one rule was that there were no rules.

According to Mohammad Shah Hazara, who started training in 1999 at the local club of Ustad Raza Ameni and was honoured with the Sitara-e-Imtiaz in 1996 for his excellent performance, martial arts are a diversion from societal ills. For him, engaging in martial arts closes the doors on some of the darker corners of Quetta’s drug and violence-ridden underbelly.

Shah received training under the patronage of the International Olympic Committee. Now a trainer himself, Shah says the sport instills awareness and discipline in a person. Nearly 200 students, including 50 girls, are being training at Youth Hazara Taekwondo Academy, which Shah has been running since 2002. “Five girls and eight boys from my academy have taken part in national games. We have won 12 gold medals, eight silver medals and 16 bronze ones,” he shares with pride.

Martial arts teacher Ameer Mohammad, who has been associated the sport since the past 12 years and started instructing students three years ago, agrees with Shah. “The rules of martial arts are such that they instill discipline in a person.” Mohammad aspires to be an international player and coach, but the present situation of Quetta has deterred him from realising his dream. “My family does not allow me to take part in events because of the precarious law and order situation,” he says.

Hoping for a drastic change in the security situation of Quetta, however, sounds like wishful thinking to many. For some of these young, agile martial artists, it’s about living a life worth remembering, which in Lee’s own words, is the key to immortality.

Aikido A Japanese martial art performed by flowing with the motion of the attacker rather than opposing it straight-on.

Hapkido A Korean martial art which uses joint locks, kicks, punches and other striking attacks. It focuses on using circular motions, non-resisting movements and control of the opponent, using footwork and body positioning to gain leverage and avoid strength against strength.

Judo A relatively modern Japanese martial art created in 1882. It is a dynamic combat sport that demands both physical prowess and great mental discipline.

Jiu Jitsu A Japanese martial art for defeating an armed and armoured opponent in which one uses no weapon, or only a short weapon.

Krav Maga A hand-to-hand combat system developed in Israel that involves wresting, grappling and striking techniques, mostly known for its extremely efficient and brutal counter-attacks used to keep the practitioner safe and incapacitate the opponent by any means necessary.

Kung Fu A Chinese martial art in which a number of fighting styles have developed over the centuries in China. Nowadays, it is regarded as a traditional sport gaining more and more popularity and even stands as a representative for Chinese culture.

MMA (Mixed Martial Arts)  A full contact sport that allows a variety of fighting styles to be used including martial and non-martial arts techniques. Striking and grappling techniques, either standing or on the ground, are allowed.

Muay Thai  A martial art from Thailand which uses stand-up striking and clinching techniques. It makes prominent use of punches, kicks, elbow strikes and knee strikes, using eight points of contact, in contrast to the hands and feet often relied upon in other martial arts.

TaeKwonDo  A Korean art of self-defense, one of the oldest forms of martial arts, reaching back over 2,000 years, and the most widely practiced martial art in the world.

Tai Chi An internal Chinese martial art practiced for both its defense training and its health benefits. A multitude of training forms exist, including the westernised, standardised version of tai chi which has visual similarities to the Chinese tai chi, but no martial arts aspect.

Mohammad Zafar is a Quetta-based reporter for The Express Tribune.