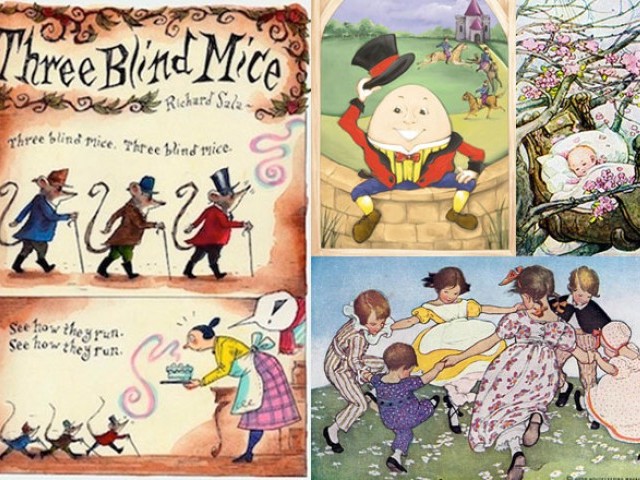 Unknowingly when we sing these nursery rhymes we engage our child with centuries-old tradition that seems harmless. PHOTO: FILE

How many of us are guilty of mindlessly singing nursery rhymes like Baa Baa Black Sheep to our children? We all are. But do you really know the sinister backstories to these seemingly innocuous children’s nursery rhymes?

You’ll be surprised to know that the earliest nursery rhymes originated in the 14th century – the ‘golden age’ came later in the 18th century – of course, the roots go back further, every era probably had it’s own rhyme for children.

Seth Lerer, dean of arts and humanities at the University California – San Diego, has also emphasised the ability of nursery rhymes to foster emotional connections and cultivate language. “It is a way of completing the world through rhyme,” he said in an interview with NBC Today. “When we sing [them], we’re participating in something that bonds parent and child.”

Unknowingly when we sing these nursery rhymes we are engaging our child with centuries-old tradition that seems to be harmless on the surface.

Compiled from BBC, Top Tenz, Mental Floss and Listverse, here are 10 nursery rhymes which do not spell love, care and/or innocence: Would you have guessed that this nursery rhyme is about medieval wool tax imposed in the 13th by King Edward I? Under the new rules, a third of the cost of a sack of wool went to him, another went to the church and the last to the farmer. Thus, nothing was left for the shepherd boy, crying down the lane. Black sheep were also considered bad luck because their fleeces cannot be dyed and so they were worth less to the farmer. This rhyme is a tale of misery and woe.

2. Ring a ring o roses, or ring around the rosie You might want to reconsider doing the “atishoo, atishoo, we all fall down” with your child because it literally means fall dead. Here’s why, one interpretation suggests that this rhyme may be about the 1665 Great Plague of London: the “rosie” being the malodorous rash that developed on the skin of bubonic plague sufferers, the stench of which then needed concealing with a “pocket full of posies”. The Bubonic plague killed 15 per cent of Britain’s population, hence “atishoo, atishoo, we all fall down (dead).” It is believed that this rhyme refers to events preceding the Glorious Revolution. The baby in question is supposed to be the son of King James II of England, but was widely believed to be another man’s child, smuggled into the birthing room to ensure a Roman Catholic heir. The rhyme is laced with connotation: the “wind” may be the Protestant forces blowing in from the Netherlands; the doomed “cradle” the royal House of Stuart. The earliest recorded version of the words in print contained the ominous footnote: “This may serve as a warning to the Proud and Ambitious, who climb so high that they generally fall at last”. This one may be about Bloody Mary, daughter of King Henry VIII and concerns the torture and murder of Protestants. Queen Mary was a staunch Catholic and her “garden” here is an allusion to the graveyards which were filling with Protestant martyrs. The “silver bells” were thumbscrews; while “cockleshells” are believed to be instruments of torture which were attached to male genitals. Ouch! This animal rhyme is an apparently nonsensical and upon subsequent inspection, reveals itself to in fact be about poverty, pawnbroking, the minimum wage – and hitting the Eagle Tavern on London’s City Road.

The ‘weasel’ in the rhyme is a winter coat, which has to be pawned – or ‘popped’ – in exchange for various things. The first verse describes the cheapest food available; the narrator of the poem has no money, so ‘pop’ goes the weasel. The second verse describes a night out at a music hall called the Eagle Tavern, which was located on the City Road. But music halls – and drinks – cost money. Pop goes the weasel. The third verse is a bit more obscure than the first two; a monkey is slang for a tankard, while knocking off a stick was slang for drinking. The last verse probably refers to the narrator’s day job. This seemingly child-friendly nursery rhyme actually has a sexual undertone to it. Georgie Porgie is a caricature of George Villiers, a bisexual nobleman who lived from 1592 to 1628. George was greatly favored by King James I. His friendship with the king was so intimate that he was able to gain immense power and position in just a short period of time — he was named the first Duke of Buckingham at the age of 31.

George and King James I were rumored to be lovers due to their intimate friendship, and accounts from various court diaries and letters proved this to be true. King James I even declared his love for George by publicly declaring, “You may be sure that I love the Earl of Buckingham more than anyone else, and more than you who are here assembled.”

Though George had a covert romantic affair with the king, he was a womanizer (…kissed the girls and made them cry…), and had sexual relationships with numerous women, including the daughters and even the wives of many English noblemen. Because the king favored him, the English noblemen were incapable of prosecuting him, thus explaining the line, “when the boys came out to play, Georgie Porgie ran away”. Humpty Dumpty wasn’t a real person; nor was he an odd, fragile egg-shaped thing/person. It turns out that it was a cannon, owned by the supporters of King Charles I. Humpty Dumpty was used to gain control over the city of Colchester during the English Civil War. Once in Colchester, the cannon sat on church tower until a barrage of cannonballs destroyed the tower and sent Humpty into the marshland below. Although retrieved, the cannon was beyond repair. Humpty the cannon was a feared and effective weapon.

8. There was an old woman who lived in a shoe Some experts suggest that the old woman is actually a “he”. Yes, you read that right. The old woman referred to in the rhyme is a man, King George II to be exact. He was called “old woman” by his enemies because he started the fashion trend of wearing white powdered wigs.

The word “children” in the rhyme represented the members of the Parliament while the bed symbolized the Houses of Parliament. Just like in the rhyme, those members who did not follow or agreed with King George faced his (old woman’s) wrath; they were “whipped…all soundly and sent… to bed!” Unknown to many of us, the term Bloody Mary and the rhyme Three Blind Mice actually have one thing in common—they refer to the same ruthless person.

The farmer’s wife depicted in this rhyme is Mary I, the daughter of King Henry VIII and the Catholic Queen, Catherine, who ruled England from 1553 to 1558. She is known as “Bloody Mary” because of her atrocious acts; she ordered the torture and execution of many Protestants during her short-lived reign.

On the other hand, the three blind mice referred to in the rhyme are three Protestant noblemen who were charged of secretly planning to kill Queen Mary, and no, they were not blind. As punishment, these three men suffered a horrible death—they were burned alive! This rhyme follows a condemned man en route to his execution – “Here comes a chopper / To chop off your head!” – past a slew of famous London churches: St Clemens, St Martins, Old Bailey, Bow, Stepney, and Shoreditch.

According to Random House’s Max Minckler, as late as 1941 the Society was condemning 100 of the most common nursery rhymes, including Humpty Dumpty and Three Blind Mice, for “harbouring unsavoury elements”.

“A lot of children’s literature has a very dark origin,” explained Seth Lerer, dean of arts and humanities at the University California to Today.com. “Nursery rhymes are part of long-standing traditions of parody and a popular political resistance to high culture and royalty.” Indeed, in a time when to caricature royalty or politicians was punishable by death, nursery rhymes proved a potent way to smuggle in coded or thinly veiled messages in the guise of children’s entertainment.

In largely illiterate societies, the catchy sing-song melodies helped people remember the stories and, crucially, pass them on to the next generation.

Now, that you already know the gruesome hidden meanings behind these nursery rhymes would you still chant them to your little ones?

My book is autobiographical: Cindy Crawford