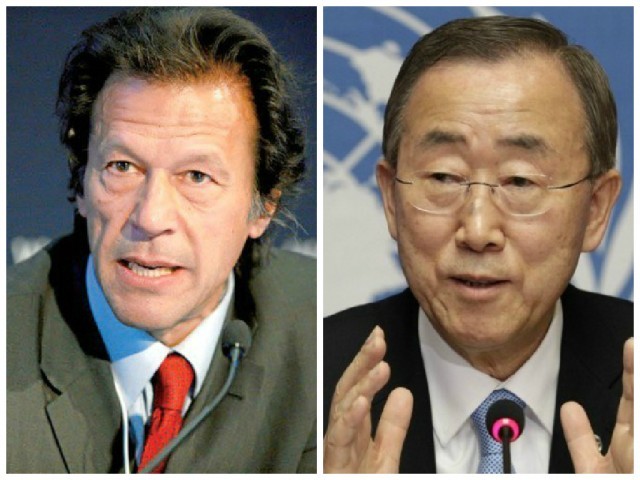 ISLAMABAD: Pakistan Tehreek-e-Insaaf (PTI) chairman Imran Khan in a letter to UN Secretary General Ban Ki-moon hit out at the United Nations’ failure to fulfill its basic principles of upholding human rights and protecting people from genocide in Myanmar.

“On behalf of myself and my party Pakistan Tehreek-e-Insaf, I wish to state that we have found the silence and complete inaction by the UN on the continuing plight and persecution of the Rohingya Muslims of Myanmar a shameful testament to the failure of the UN to fulfill its basic principles of upholding human rights and protecting a people from genocide,” Imran wrote to Ban Ki-moon on Wednesday.

The PTI chief added, “I call on you, as the Secretary General to move the UNSC to end the persecution and genocide of Rohingyas within Myanmar and to bring to an end their inhumane plight on the high seas, under Chapter VII of the UN Charter.”

Read: Precarious limbo awaits Rohingya who make it to Malaysia

Imran said the principle of humanitarian intervention was specifically added to the UN mandate in the face of the Rwandan genocide but the UN has once again failed to protect people from persecution and genocide — this time the Rohingyas of Myanmar.

The letter urged the UN Secretary General “to move the UNSC to end the persecution and genocide of Rohingyas within Myanmar and to bring to an end their inhumane plight on the high seas, under Chapter VII of the UN Charter.”

Explaining the plight of the persecuted community, the letter said that in the past three years, more than 120,000 Rohingya Muslims have fled abroad under desperate circumstances and conditions.

“The ASEAN meeting, held on 29 May 2015, to discuss the Rohingyas plight, did little to resolve the issue and, even in terms of aid and assistance, the final statement effectively reflected proposals and recommendations with no mechanism for ensuring implementation,” it added.

The PTI chief further said, “It has been heartbreaking to witness the silence of the UN and the international community on the persecution of the Rohingyas in Myanmar since the 1970s.”

“The hypocrisy prevalent within the international community on human rights and humanitarian interventions has been acutely evident as the Rohingya crisis has unfolded.”

Further, the letter upheld the Rohingya crisis is as clear a threat to international peace and security as any, in the expanded notion of security now adopted internationally – which goes beyond mere conventional wars.

“Global security is indivisible and the international community cannot be secure while in one part of the world persecution and genocide of a people in going on with impunity,” the letter argued.

“It is time for the UN to act decisively or forever lose its relevancy as a global body reflecting the will of the people with which the preamble of the UN Charter begins. It is time to live up to that commitment on which the UNO was founded – in the aftermath of a global appeasement to the genocide of another people in Europe,” the letter added.

Myanmar’s navy refused on Sunday to let journalists approach a remote island where more than 700 migrants are said to be held following their rescue last week.

Reporters have been trying to access Thamee Hla Island at the mouth of the Irrawaddy since the authorities announced that 727 people, including 74 women and 45 children, had been found drifting in a boat off Myanmar’s coast and had been taken there.

They are part of a recent exodus of persecuted Myanmar Rohingya Muslims and Bangladeshi economic migrants who have fled the region en masse in a crisis that regional nations have struggled to deal with.