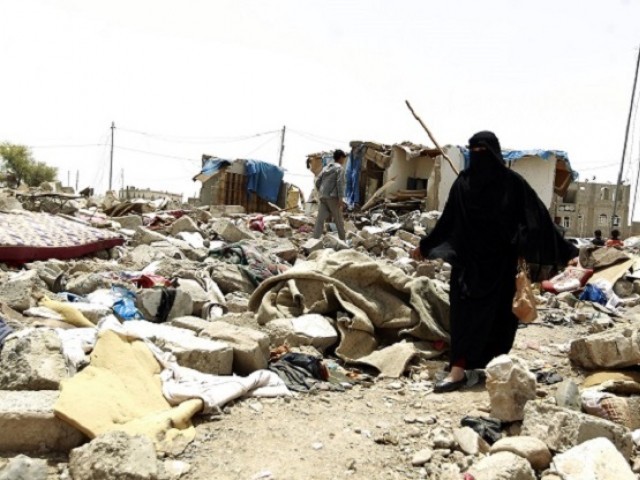 SANAA: The Saudi-led coalition bombing Yemen on Monday blamed ceasefire violations by Iran-backed rebels as the reason for not extending a five-day truce and resuming air strikes.

Iran, a key ally of the Shia Huthi rebels, called for an end to the “barbaric” Saudi bombing, and said Riyadh was not a suitable host for political talks.

The humanitarian ceasefire ended at 2000 GMT on Sunday despite calls from UN envoy to Yemen Ismail Ould Cheikh Ahmed and relief agencies for an extension.

“That’s why we do what is necessary to be done,” he told AFP.

An hour after the ceasefire expired, air raids hit the rebel-held presidential palace in the main southern city Aden as well as a base of the pro-rebel special forces there, military officials and witnesses said.

The coalition also targeted rebel positions in Aden’s neighbourhoods of Tawahi and Khor Maksar, said the sources, without providing details on casualties.

The Saudi-owned Al-Arabiya news channel said Saudi forces fired artillery at Huthi positions over the border in Yemen. It said the rebels hit a crossing point in Najran province.

The coalition has waged an air war on the rebels since late March in an effort to restore the authority of exiled President Abedrabbo Mansour Hadi, who is now based in Riyadh.

Assiri accused the rebels of exploiting the truce to their advantage.

“These militia did not stop their fighting. They continued to attack borders, to attack cities in Yemen,” Assiri said, adding there was “a very big change on the ground” during the pause.

He accused the rebels of moving missiles with a range of about 70 kilometres (43 miles) towards the border with Saudi Arabia, said there was shelling “every day” of the Saudi boundary zone, and the rebels “hijacked” food and fuel aid in Yemen.

The Huthis are boycotting a three-day meeting of Yemeni political parties that opened in the Saudi capital on Sunday, insisting the talks be held in Yemen.

Iran, which denies accusations it armed the Huthis, called for the talks to be held in a “neutral” country.

Several representatives of the General People’s Congress party of ousted president Ali Abdullah Saleh, who is accused of backing the rebels, did take part in the Riyadh talks.

Sporadic clashes continued Monday in Aden, the scene of fierce fighting since rebels advanced on the southern port in late March where Hadi was holed up.

According to Aden health chief Al-Khader Laswar, 517 civilians and pro-Hadi fighters have been killed in the city in the past 50 days.

The toll includes 76 women and children, he said, adding that 3,461 people were wounded, and most medics have fled Aden.

Pro-Hadi fighters also killed 12 rebels in an attack Monday on a base in the southern province of Daleh, a military official said.

The United Nations says more than 1,600 people have died in the conflict since late March.

Some aid has trickled in since the pause in fighting, but residents of areas where clashes persist complain that they lack the most basic supplies.

Although the truce had brought calm to the capital and some other areas, people remained deprived of basic needs, including water, electricity and petrol.

Hundreds of cars have lined up at the few petrol stations operating, according to an AFP correspondent.

The ceasefire allowed supplies of petrol and food to be delivered to Yemen but anti-Huthi groups accuse the rebels of confiscating the aid.

“The truce has only served the aims of the militia, which has increased its readiness and stocked fuel through aid that arrived in their areas of control,” said a statement of anti-rebel forces in the central city of Taez.