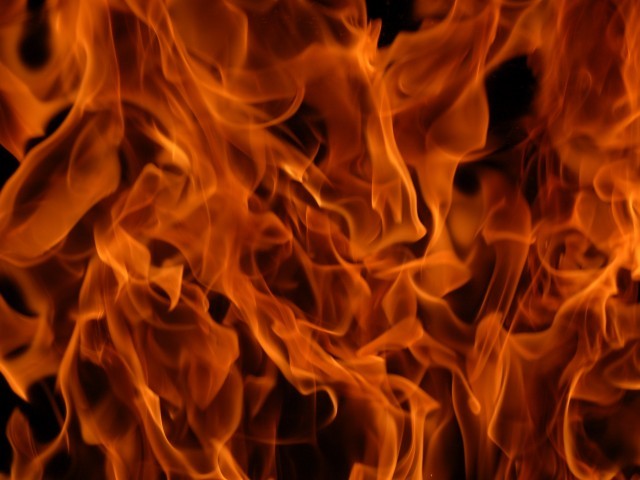 LAHORE: A fire apparently triggered by a short circuit claimed the lives of six children – all siblings from one to 12 years of age – in Punjab’s provincial capital late Saturday night.

According to preliminary investigation, the fire broke out at midnight in a room on the second floor of a three-storey house located on Shershah Road in Kot Khawaja Saeed area. At the time of the incident, all male members of the extended family living in the house were offering special prayers at a local mosque in connection with Shab-e-Mairaj.

Three children – Zain Ali, 11, and one-year-old twins, Azan and Azhan – were sleeping in the room when a short circuit in the air-conditioner triggered the blaze that quickly spread to other rooms of the house, family members said.

The children’s father, Dr Qaiser Shah, told The Express Tribune that his eldest daughter Minahl, 12, who was sleeping in a room on the third floor along with her sisters Dua, 8, and Aneeba, 5 – informed him about the fire by cellphone.

“As soon as I reached home I saw the second floor on fire,” he said, adding that he and his wife tried to rescue the children by dousing the fire, but it was too intense. In the meantime, other family members also reached home and somehow managed to enter the gutted room in the second floor, where all the three children had already died due to serious burn injuries.

Shah said the fire had started spreading to other rooms on the second floor, adding that it took the family members some time to realise that the girls were on the third floor.

“We ran upstairs to rescue my daughters, but they were already suffocated to death with Minahil still holding cellphone in her hand, Dua lying dead on the floor and Aneeba lying under the bed where she had crawled into, probably due to fear,” said the father, as he burst into convulsive sobs.

Hafiz Mustafa, a neighbour of Dr Shah, said people called rescue 1122 and City District Government’s (CDG) fire brigade unit after they heard shouts for help. “But after fire engines failed to show up in 30 minutes, they rushed to the nearby station of fire brigade where the staff was found resting and gossiping,” he said.

Zahid, an uncle of the deceased children, alleged that the fire brigade wasted time as they first got water tankers of the fire engine filled. The fire engine was also so antiquated that it had to be first pushed before it started, he said.

Responding to the allegations, Rescue 1122 official Dr Ahmad Ali said they received the first call precisely at 1:31am whereas their vehicle reached the spot within 17 minutes of the call. By the time we reached there, CDG’s fire engine was already present at the spot.

He, referring to an initial investigation, said the fire had probably started at least more than an hour before the Rescue 1122 was called. “The children were unattended and the family members could not detect the fire early on. Moreover, they, in their panic, forgot to call the Rescue 1122 and instead ran to fire brigade’s office,” he said.

Prime Minister Nawaz Sharif and Punjab Chief Minister Shahbaz Sharif expressed grief over the incident.  A high-level inquiry committee has been formed under PML-N MNA Pervaiz Malik to probe into the alleged inefficiency of the fire brigade staff.

Talking to The Express Tribune, MNA Pervaiz Malik said an inquiry was under way. “Whosoever is found responsible for the alleged delay that cost six innocent lives will find no place for himself in the department,” he added.

The deceased were laid to rest at a local graveyard in Shadbagh after their funeral prayers in which heart wrenching scenes were witnessed. People from neighboring vicinities also drove in to attend the funeral.