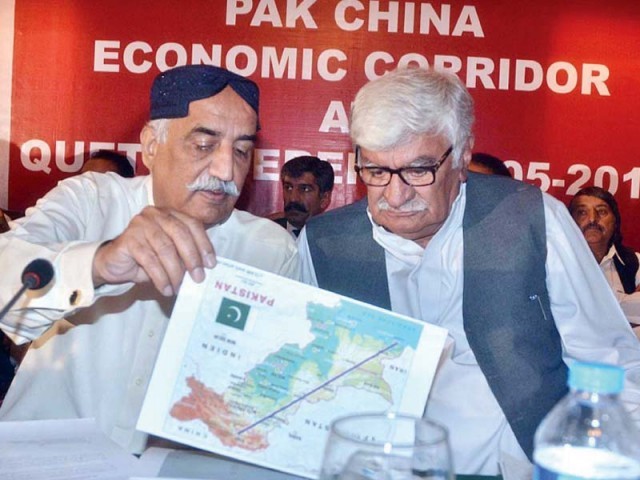 QUETTA: A multi-party conference has welcomed the multibillion-dollar China-Pakistan Economic Corridor project as a ‘game changer’ for the region but opposed any change in its ‘original route’ that passes through northern parts of Balochistan and southern districts of Khyber-Pakhtunkhwa.

The ruling Pakistan Muslim League-Nawaz, however, stayed away from the confab.

“The purpose of organising APCs in all the provinces is to give a clear message to our people that all key decisions are not solely taken in Islamabad,” ANP chief Afandyar Wali told the participants. “The economic corridor is a very important project which will usher in an economic revolution in the country, but please don’t make it controversial,” he said, addressing the federal government.

The ANP leader said Prime Minister Nawaz Sharif has been angry since he asked him how the prosperity and development of Pashtoon and Baloch areas could harm Pakistan. “We believe Pashtoon and Baloch people are being ignored under a specific agenda,” he alleged.

“PPP co-chairman Asif Ali Zardari has agreed to the route we have proposed,” he added. “The economic conditions of the people of Balochistan, Khyber-Pakhtunkhwa and tribal regions will improve, if the route we have suggested is adopted.”

PPP’s senior leader Khursheed Shah, who is also leader of the opposition in the National Assembly, credited his party’s government for initiating the Gwadar port project “in accordance with the wishes of the people of Balochistan”. “The PPP had always given importance to public opinion and fought for the suppressed communities,” he said.

According to a declaration issued by the APC, all participants welcomed the China-Pakistan Economic Corridor project calling it an economic ‘game changer’ for the region. The APC appreciated the huge Chinese investment in Pakistan, but demanded the government reveal details of the $46 billion worth of projects signed during the recent visit of Chinese President Xi Jinping.

“The original route that passes through Afghanistan and Central Asia is safer than the new one,” reads the declaration. “It is sad that the elected representatives of Gwadar and other areas were not taken into confidence while finalising the corridor route.”

The APC participants said if their opposition to the change in the corridor route was called treason, then they would be ready to accept that but would not budge on their demand.

However, Planning and Development Minister Ahsan Iqbal dismissed reports of any change in the corridor route. Speaking to journalists at the Planning Commission office, he said as a result of the economic corridor links from Gwadar to Peshawar would be established through western, central and eastern alignments. The western link would be completed first by 2016. He, however, clarified there was no eastern route.

Similarly, the central line would be from Gwadar to Baseema, Khuzdar, Sukkur, Rajanpur, Muzaffargarh, Bakhar, Dera Ismail Khan and then Peshawar. The eastern line would be developed from Baseema to Khuzdar, Sukkur, Dera Ismail Khan, Lahore, Islamabad and Faisalabad. The minister said no special industrial zones have been decided yet along the corridor route either by the Chinese or Pakistani government.