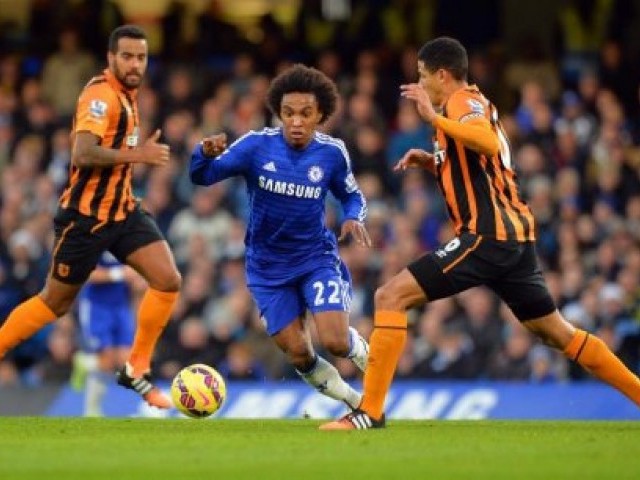 A file photo of a Premier League match between Hull City and Chelsea. PHOTO: AFP

LONDON: The penultimate round of matches in this season’s Premier League gets under way on Saturday with several clubs looking to avoid joining already-relegated Burnley and Queens Park Rangers in English football’s second-tier next term.

Hull currently occupy the one remaining relegation place but can do themselves the power of good, if not make absolutely certain of their top-flight status, with a win away to a Tottenham Hotspur side who have not scored in five of their last eight games.

The Tigers lost 1-0 to Burnley last weekend and manager Steve Bruce has demanded a much-improved performance from his side against Spurs.

“My main concern is we haven’t got anywhere near the level we’re capable of and I take responsibility for that,” Bruce said.

“A lot of them fell short of the level we require and we have got to try and get it back because we have still got a chance,” the former Manchester United defender added.

Newcastle and Sunderland are the next two clubs in line, with the north-east rivals both on 36 points, although Sunderland do have a game in hand, against Arsenal, next week.

This weekend sees Newcastle away to QPR while Sunderland face Leicester, just a point and a place above them, in what promises to be a classic relegation “six-pointer”.

Last week’s 1-1 draw with West Brom ended Newcastle’s run of eight straight defeats, their worst for 38 years, and left them two points above the relegation zone with two games to play.

Victory at Loftus Road, allied to a Hull failure to win, would see Newcastle stay up but Magpies caretaker boss John Carver, desperate to be the manager of his hometown club come next season, said he wanted more than that.

“My pride has been hurt by the run of results. I want to do something about it. If that means winning the next two games, that will make me feel a little bit better,” Carver said.

Sunderland welcome Leicester to the Stadium of Light buoyed by a morale-boosting 2-0 victory at Everton.

Sunderland manager Dick Advocaat arrived on Wearside in March thinking six or seven points might be enough to see the Black Cats beat the drop.

But although the 67-year-old Dutchman and his charges have taken 10 points from six games since his arrival, Sunderland are still not out of danger.

“We thought that with six points, we had enough, and now we have 10 points and we still need three points, so hopefully we can do that on Saturday,” Advocaat said.

Leicester, however, are currently on a brilliant run of six wins in their last seven matches which has seen the Foxes give themselves a remarkable lifeline after being bottom of the table for 140 days this season.

“First and foremost our concentration has to be on ourselves, on our own game, that’s not going to change,” said Leicester manager Nigel Pearson.

At the other end of the table, Liverpool’s match against Crystal Palace promises to be emotional for skipper Steven Gerrard as it will be the last time the veteran midfielder plays at Anfield before joining the LA Galaxy.

Chelsea are at West Bromwich Albion on Monday.