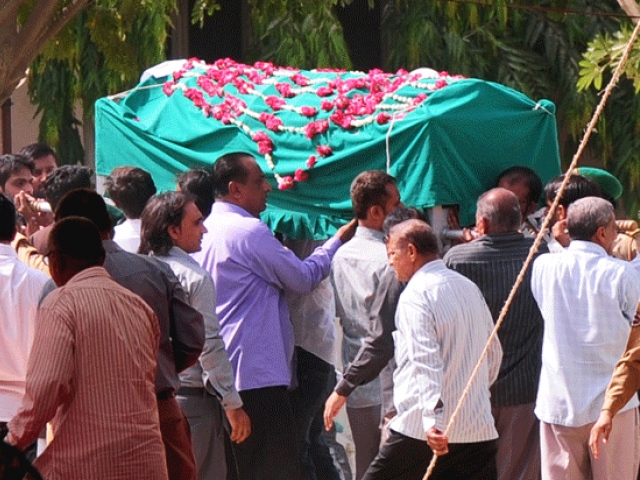 KARACHI: Just a day after the deadly attack on Karachi’s Ismaili community, the death toll rose to 45 as two critically injured succumbed to their injuries, Rizwan Jamil, communications officer for the Ismaili council of Pakistan confirmed Thursday.

The deaths come after funeral prayers for the 43 deceased were conducted in the city earlier today, with volunteers and scouts wearing their uniforms; which is only required during crucial moments in the community.

The funeral of one victim, Sani Sultan Ali from Salimabad took place on Wednesday evening.

People dispersed after the funeral, while children sat in silence in the courtyard inside the colony. Men departed for the graveyard. The Ismaili community will conduct prayers for the martyrs in their evening prayers.

President Aga Khan Council for Pakistan Iqbal Walji expressed his gratitude to the government, Army, political leaders and general public for their support.

Walji also acknowledged the assurance given by the authorities to ensure the safety and security of the Ismaili community in the country.

Initial investigation reports revealed that the culprits hailed from Afghanistan.

On the day of the attack, in which 45 persons including women and children were killed, Sindh Information Minister Sharjeel Memon said that some clues were found at the crime scene but was unable to share these due to security reasons.

The men are said to hail from Afghanistan and allegedly ran a small hotel business in the city. A search operation is under way and investigation continues in efforts to bring the culprits to justice.

According to forensics experts, the attackers used multiple types of weapons, including 9mm pistols and sub machine guns.

The whole nation was saddened by the attack in which three of the assailants climbed aboard the alAzhar Gardens bus and opened fire at the 51 passengers on board the bus.

“People of Sindh, particularly Karachi think it is an attack on their home,” Sharjeel Memon said when he addressed the media on Wednesday.

Condolences poured in from across the world as rescue efforts and investigation and search operations commenced.

Investigation has led to the identification of the culprits who were reportedly dressed in western attire and fled the scene on two motorbikes.

A day of mourning is also being observed across the province.

“The government has failed the Ismailis”

Addressing the media, Muttahida Qaumi Movement’s Khalid Maqbool Siddiqui ascertained that yesterday’s incident was proof that a lot is yet to be done in the country.

“The government failed to provide security to this community,” he said.

He added that “the incident has impacted everyone in the country and that the party would fight for the rights of every citizen.”

“Sindh CM should hand in resignation”

On the day of the attack, CM Sindh while addressing the media confirmed the suspension of SHO and DSP of the area.

“This is an unprecedented incident and we will find those responsible,” he said.

He also added that “The pamphlet shows that terrorists have carried out the attack and they will not be left at any cost.”

He ordered for an inquiry into the incident and sought a report within a week.

Further, the CM also announced compensation for victims of the bus attack in Karachi, promising Rs0.5m for victims’ families.