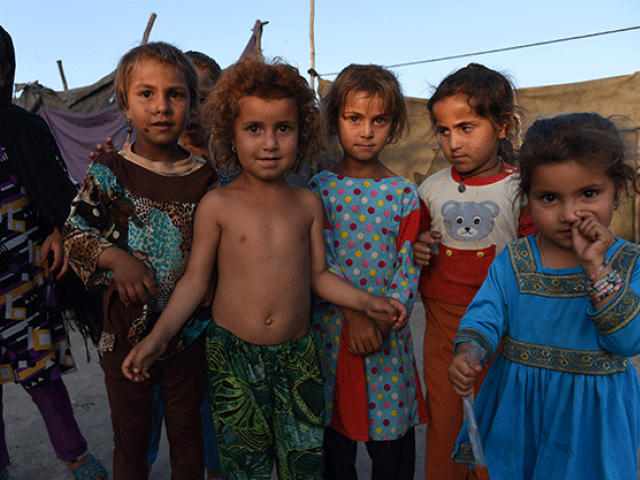 AFGHANISTAN: Like thousands of Afghan returnees, Neik Mohammad became unwanted in Pakistan after a Taliban massacre at a Peshawar school, forcing him to return home to a life of misery and fear in a squalid refugee settlement.

More than 65,000 Afghans have returned since the start of the year after coming under intense scrutiny following the December massacre — billed as Pakistan’s “mini 9/11”.

The figure, which eclipses the 25,000 Afghans who returned from Pakistan over the whole of last year, was a result of the breakdown in relationships between the migrants and their host communities following the carnage.

“We were happy there (Pakistan), we had our own houses and we owned our own businesses,” Mohammad told AFP outside his tent in a fetid relief settlement near the eastern city of Jalalabad.

“There is no house, no business for us in Afghanistan, we live in tents,” said Mohammad, who returned two months ago with 16 members of his family, including five children.

Hundreds of thousands of people fled Afghanistan during the last three decades of war, with a majority of them taking refuge in neighbouring Pakistan.

Said Ahmad, a 63-year-old Afghan with a wispy white beard, fled to Pakistan some 20 years ago to escape the civil war but was forced to return recently to a volatile country still battling a resilient Taliban insurgency.

“The local people of Pakistan were very nice to us, but the government was giving us a hard time. Government officials were constantly raiding our houses, bothering us, dishonouring us,” he told AFP.

The number of Afghans who crossed the border in the first four months of the year, fleeing “pressure” exerted by Pakistani officials, was nine times higher than the same period last year, according to the International Organization for Migration (IOM).

Aside from 60,000 “spontaneous” returnees, who chose to return voluntarily, nearly 6,000 undocumented Afghans were expelled by Pakistan — including elderly people in need of medical assistance and unaccompanied minors, IOM said.

Around three-quarters of them settled near Jalalabad, the largest city in southeastern Afghanistan, while others returned to Kabul and other central provinces.

Many just set up encampments wherever they could in villages on the fringes of Jalalabad such as Behsud, pitching tents on dusty plots of land or building mud-brick shelters.

Most struggle to find jobs in Afghanistan, whose economy remains crippled by decades of war and as international aid fast evaporates.

“We have never seen such a surge in returns like we have since January 2015,” IOM’s Kabul-based media officer Matthew Graydon told AFP.
“It’s a humanitarian challenge at the border to assist people who come back, who have nothing and who have been outside the country for decades.”

There are an estimated three million Afghan refugees living in Pakistan either officially or unofficially, most of whom left their country to escape conflict in the 1980s and 1990s.

They are viewed with deep suspicion inside Pakistan and routinely accused by authorities of harbouring militants.

The Peshawar attack — which killed 153 people, mostly children — mounted further pressure despite a lack of evidence linking the refugees to the Taliban-claimed attack.

“There is certainly a correlation between the terrible incident in Peshawar last December,” Graydon said of the surge in returnees.

“After that there was a change in the climate in Pakistan which lead to a number of Afghans feeling that they would either decide to return or were deported.”

But Imtiaz Qureshi, the law minister of Pakistan’s Khyber Pakhtunkhwa province bordering Afghanistan, said “no Afghan refugee had been expelled by force” from his region.

“Only those Afghans were expelled who had been staying illegally in Pakistan and did not have any valid ID or any legal document on them,” Qureshi told AFP.

Qureshi said there had been a “marked difference in security” in the province since the expulsion of illegal Afghan refugees gathered pace.
“There is a visible reduction in the crime rate and incidents of target killings, kidnappings and robberies,” he said.

IOM, one of the major foreign aid agencies in Afghanistan, says it is able to help only a fraction of Afghan returnees crossing the border due to limited international funding.

The war-battered nation has seen an inexorable exodus of aid and investment as Nato’s 13-year combat mission in Afghanistan winds down.