Ali Sethi: A new stylus in an old groove

Ali Sethi: A new stylus in an old groove

Classi­cal singer Ali Sethi talks about his musica­l journe­y and why, for him, fusion is not a fallac­y
By Faiza Rahman
Published: May 3, 2015
Tweet Email 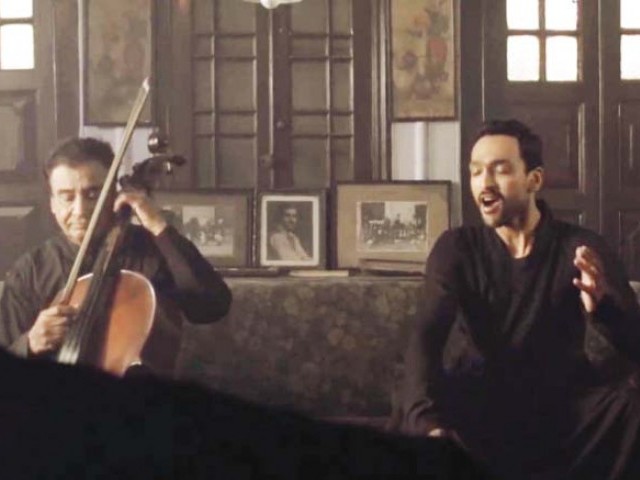 A vocal endeavour: A screengrab of Sethi performing in the video of Kithay Nain Na Jorin. PHOTO CREDIT: ARIF SOOMRO

Ali Sethi is a new-generation pillar of classical music. A disciple of Ustad Naseeruddin Saami, one of the strongest living maestros of Eastern classical in Pakistan, Sethi’s venture into music was not habitual or accidental, but willful and ideological. While chatting at a café overlooking the lagoon at the Beach Luxury Hotel in Karachi, Sethi talks about his foray into the sounds of South Asia.

Vocal practice started late for Sethi. Despite being sensitive to good sounds and having a penchant for melodies, he started his formal schooling in music at the age of 24. He says his earliest musical memory is of listening to Ustad Nusrat Fateh Ali Khan. Now, in his seventh year of training under Ustaad Saami, Sethi has covered evergreen numbers like Dil jalanay ki baat kartey ho and Mohabbat karnay walay kum na hongey. “I just knew I was to become a singer; so, in my sophomore year in college, I bought myself a harmonium. Then, I started to look for an ustad who could teach me,” says Sethi. It essentially started with YouTube, Sethi recalls. He jammed to a few Reshma songs in London with musicians Tsivi Sharett and Natalie Rosario, which were then uploaded on the video-sharing website and received a great response. There was no looking back after this; he started training exhaustively and releasing covers on SoundCloud and YouTube.

This year’s Karachi Literature Festival witnessed the release of Sethi’s first music video. The song, Kithay Nain Na Jorin by Reshma, has immense sentimental value for him. “This was the song I had jammed to in London. This was the song I crooned since I was much, much younger.” The Punjabi folk song has been picturised on Sania Saeed and Adnan Siddiqui. The video, with a beautiful storyline, has been shot in the Wajid Ali Shah haveli in Lahore. It also stars Sethi’s sister, journalist Mira Sethi.

Sethi is a person of the arts, through and through. Along with regular singing and jamming sessions with dormmates, he took to writing at a young age, and is an avid reader of fiction. He has been schooled in South Asian history at Harvard, and has also written an English novel, The Wish Maker. “At university, I studied the myth of Anarkali in detail,” he recalls. Shot in the Wajid Ali Shah haveli in Lahore, Kithay Nain Na Jorin is evidence of Sethi’s love for everything old.

Poetry, music and stories seem to be his old companions. Sethi pursues them not because they are lucrative or because they are part of his ‘profession’, but because he deems them inseparable from himself. He agrees that classical music, old shayari and folks songs, do not carry the appeal they did in the past. “But everything is not done for utility. We do things we love because it gives us pleasure. Man is an emotional creature, and poetry, singing and writing are the stuff of emotions.”

Sethi, however, does not have any of the pomp of the gharanas. He understands that members of these families scoff at the fusion of classical music with other genres because the purity of their music tradition is their bread and butter. “I sympathise with them and completely get where they’re coming from, but I, myself, am comfortable with fusion.” When asked if he’s happy about the way different genres of music are experimented with on Coke Studio, he nods and adds: “Absolutely, Coke Studio is a good platform.” It is through this candor and receptiveness that Sethi voices new notions without obstructing the old. Faiza Rahman is a subeditor for the opinion and editorial section of The Express Tribune.

Published in The Express Tribune, Sunday Magazine, May 3rd,  2015.