Army chief vows to crush 'all mafias' in Karachi

Army chief vows to crush 'all mafias' in Karachi 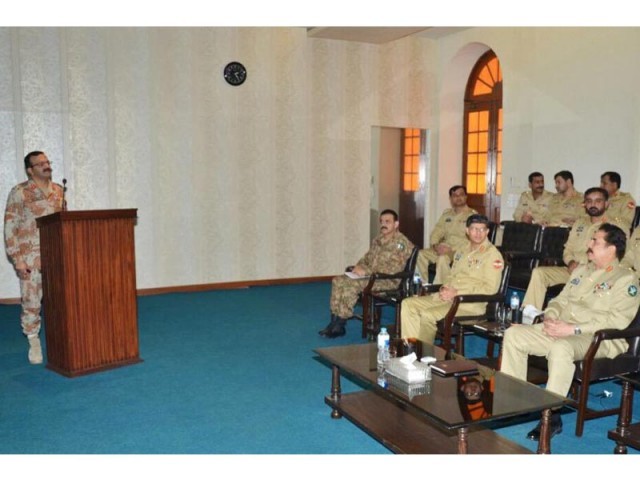 ISLAMABAD: Army chief General Raheel Sharif vowed on Wednesday to finish ‘all mafias’ in Karachi and made it clear that across the board and indiscriminate operation in the port city would continue till its logical conclusion.

During his visit to the Corps Headquarters in Karachi, the army chief said the ongoing operation in Karachi was bringing relief in terms of target killings and extortion, Director General Inter-Services Public Relations (ISPR) Major-General Asim Bajwa quoted him as saying on Twitter.

Peace in Kci priority to revive economic vibrancy,well being of the people.Will continue to work with people/govt to finish all mafias4/5

General Raheel said restoring peace in Karachi was a top priority as it would help revive economic activities and bring relief to the people.

“We will continue to work with the people and the government to finish all mafias,” he said.

General Raheel also appreciated the efforts of law enforcement agencies, including Rangers for a holding a peaceful by-election in NA-246.

“Latest pattern of killings in Karachi indicates a design, which needs to be checked,” he said, directing intelligence agencies and Rangers to “trace out, apprehend and expose perpetrators.”

The army chief expressed his satisfaction over intelligence input and progress so far achieved in the operation in Karachi.

Kci ops bringing relief in term of tgt killing,extortion.Ops to remain across board,indiscriminate, continue till its logical conclusion3/5