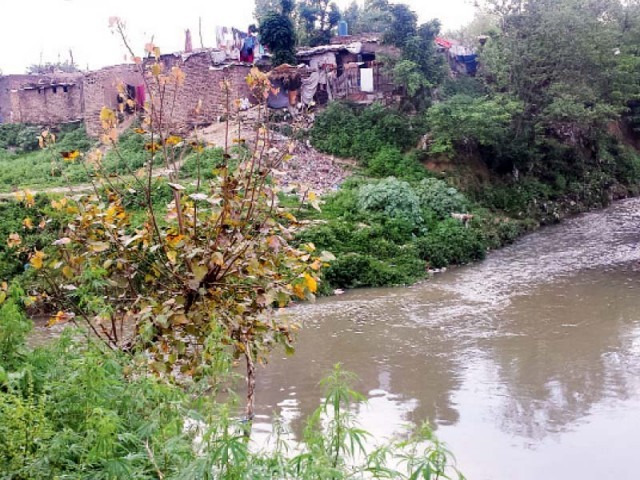 The man’s family claim he was pushed into this stream. PHOTO: EXPRESS

A handcuffed man suspected of stealing car batteries died in Sector I-9 on Saturday after falling into a stream while allegedly attempting to escape from police custody. Eyewitnesses, however, have accused police officials of pushing the man into the stream, which is at the bottom of a steep ditch. The body had not been recovered when this report was filed.

The incident took place on Saturday morning, when Farman Masih, 25, was intercepted by Assistant Sub Inspector (ASI) Shahid Munir for his alleged involvement in battery thefts. The suspects jumped into the stream near the Essa Nagri slum situated in Sector I-9, claimed, Industrial Area SHO Fayaz Shinwari.

The SHO claimed that police officials arrested him in battery theft case and one battery was recovered from his possession. When the police questioned him about the remaining batteries, he took them to the place where he sold them off. When the ASI and the suspect got there, “he leapt towards the stream. The policeman gave chase but was unable to catch him”. The officer said the police are still unsure whether the suspects had died or managed to escape.

The victim’s family however, claimed that the police brutally tortured him and pushed him into the stream.

Kishwar Masih, Farman’s mother, told The Express Tribune that around 9am, ASI Munir arrested her son and brutally tortured him without any reason. She claimed that his son was working in a local factory and was never involved in any robberies. He was a drug addict but not a thief, she said.

Soon after the incident, relatives of the man started to search for him in the stream but failed to recover the body. They claimed that they had called police and rescue officials several times, but no one came there. However, police came after six hours of the incident when they blocked main road.

SHO Shinwari and Industrial Area SP Liaquat Hayat Niazi reached the spot after six hours and faced much criticism from the protesters. Niazi claimed that he only learnt of the incident in the evening as he was in a meeting. When asked about the family’s claim that the man was pushed, he said, “I don’t have all the details yet…I will be able to tell you once I get a full briefing from my subordinates.”