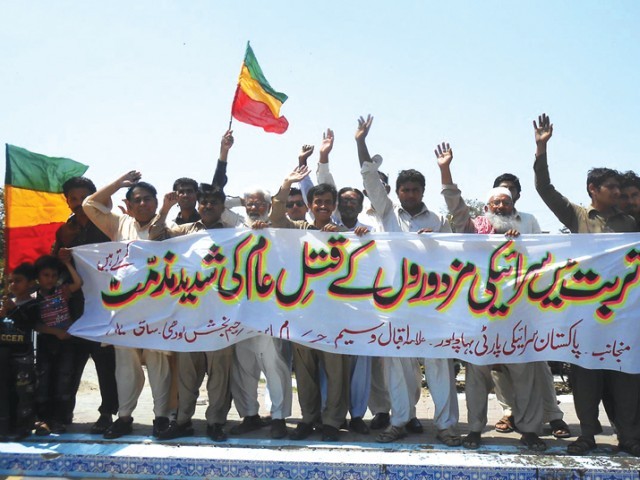 The funerals of 13 victims of Saturday’s Turbat killings were held on Sunday in Sadiqabad.

An aircraft carrying the bodies of the deceased had landed at Pano Aqil Airport late on Saturday due to adverse weather conditions. The bodies were then taken to Sadiqabad via road. Balochistan Interior Minister Sarfaraz Bugti earlier told journalists on Saturday at Rahim Yar Khan Airport that officials had been directed to arrest policemen tasked with securing the camp at the time of the carnage. He said eight people had been arrested on this account.

All business activities remained at a standstill in Sadiqabad tehsil on Sunday following a strike call by the Anjuman-i-Tajiran in the wake of the massacre. In Bahawalpur, dozens of people came together at a protest demonstration organised by the Seraikistan Qaumi Ittehad to register their outrage at the carnage. SQI district president Sarfaraz Bhatti said killing innocent people was an act of cowardice. He said terrorism had no religion, caste or conscience. The protesters demanded the government take action against those responsible of carrying out the massacre and mete out justice. Activists of the Pakistan Seraiki party staged a protest demonstration against the killings in Dera Ghazi Khan. They blocked the Quetta Road for traffic by placing tyres on the thoroughfare and setting them ablaze. Separately, Seraikistan Qaumi Council activists blocked the Indus Highway in Panigah to protest against the carnage.

The All-Pakistan Workers’ Confederation announced on Sunday that the body would be observing three-day mourning over the massacre. General secretary Khurshid Ahmed said the police had failed to protect the workers. A resolution calling on the government of Balochistan to ensure a safe working environment in the province and demanding action against those responsible for the massacre was also passed on the occasion. The resolution also asked Prime Minister Nawaz Sharif to grant Rs2.5 million compensation each from the Workers’ Welfare Fund to the families of the deceased.