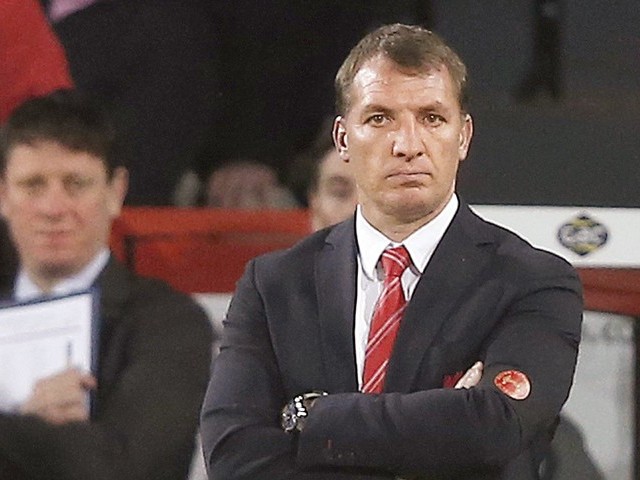 BLACKBURN: Liverpool manager Brendan Rodgers is looking to avoid an FA Cup upset at Blackburn on Wednesday as his side try to ease the disappointment of their fading challenge for a place in the Champions League.

A run of eight wins from nine Premier League games up to the middle of March had put Liverpool in a strong position to secure a top four finish.

But successive defeats against Manchester United and Arsenal either side of the international break have left Liverpool in fifth place, well adrift of the top four.

Rodgers’s team were out-played in both games and their sudden downturn in fortunes has been compounded by suspensions to Emre Can, who was sent off in last Saturday’s crushing 4-1 loss at Arsenal, as well as captain Steven Gerrard and defender Martin Skrtel.

The fall-out from Raheem Sterling’s decision to halt contract negotiations has also proved a distraction.

Yet Rodgers is still hoping to finish the season on a high by bringing silverware back to Anfield for the first time since Liverpool won the League Cup in 2012.

If the Reds can see off Championship club Blackburn in their quarter-final replay at Ewood Park, they will be through to a semi-final against Aston Villa at Wembley later this month.

But Rodgers won’t underestimate Gary Bowyer’s team, who have already knocked out top-flight sides Swansea and Stoke this season.

“There’s no doubt there is disappointment at losing those games having put ourselves in a great position. We’d worked very hard to get ourselves into the position we were in before the Manchester United game,” said Rodgers said.

“We’re honest enough as a group to focus and analyse that we did not perform well enough, and when you don’t against top-quality squads then unfortunately you can lose. But it’s gone now. We need to focus on doing the very best we can.

“The group is very committed to winning this trophy, but in order to do that you have to qualify and we know Blackburn will be a difficult game for us.

“It’s something we want to do as a group. We’ve made steady progress over a couple of seasons and arrived in a Champions League place last year and nearly won the league.

“A trophy this season will mark another step forward for us. Of course, it’s a difficult game for us but getting to a final and winning a trophy is what we want.

“We made that a real strong objective for us this season, to do well in the cups, and this is an opportunity to get to another semi-final.”

Like Rodgers, Liverpool’s Brazil midfielder Philippe Coutinho stressed the need to make amends by going all the way in the FA Cup, with either Arsenal or Reading waiting as potential final opponents.

“Winning the cup would save our season. It is very important for us to have that as an objective,” Coutinho said.

Blackburn held Liverpool to a 0-0 draw in the first meeting at Anfield last month.

Rovers famously won the Premier League title at Anfield 20 years ago and after recent troubled times, including relegation in 2012 and the imposition of a transfer embargo due to financial issues, manager Bowyer is delighted to be giving the club’s supporters another glimpse of glory.

“I am really pleased for them more than anybody else to have that opportunity to bring Liverpool back to Ewood Park and get Ewood Park rocking and remind us of the Premier League days,” Bowyer said.

“It will bring back fond memories, it’s where everybody wants to be, and this will be a little taster for us.

“You’ve only got to look at our home form against Premier League teams in the FA Cup and we’ve done particularly well.”