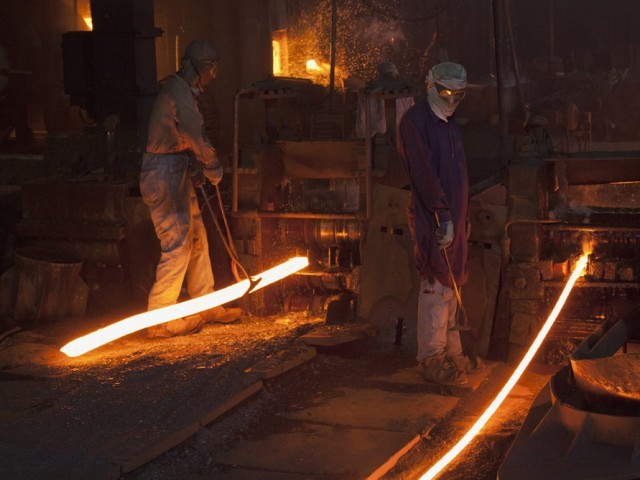 Headquartered in Karachi, Pakistan Steel Mills is the largest industrial mega corporation with a production capacity of 1-5 million tons of steel and iron foundries. PHOTO: REUTERS

ISLAMABAD: Russian Ambassador to Islamabad Alexey Y Dedov has said that his country was ready to renovate Pakistan Steel Mills (PSM) and in case of its privatisation, Moscow would mull over whether to bid for it or not.

“We demonstrated our readiness for the modernisation of steel mills. In general, we are ready to participate in the renovation of PSM. But, as for purchasing shares, firstly, the Pakistani government should decide what to do with these mills — whether to renovate or to privatise,” Alexey told media in an interview.

In the case of its privatisation, the decision would be taken keeping in view its price and other aspects because then it would be a commercial deal, he added.

Headquartered in Karachi, Pakistan Steel Mills is the largest industrial mega corporation with a production capacity of 1-5 million tons of steel and iron foundries.

When questioned on the construction of floating Liquefied Natural Gas (LNG) terminal at Port Qasim in Karachi and gas pipeline, he said “these projects are also in the sphere of our interest and we are already participating in it. So far there are some practical steps ahead in term of our negotiations and the process has already been launched.

“Our company, Global Resources, is already negotiating with Pakistani side concerning this gas pipeline from Port Qasim northward and it is hoped there would some practical outcome of these talks.”

On the issue of boosting trade between the two countries, he said there still exists a very old problem of ‘unsettled mutual debt obligation’ of $120 million pending resolution since 1990s.

The ministries of finance of the two sides were working to sort it out, he added.

“As long as the issue persists, Russia cannot provide the state guarantees on loans until this issue is resolved. Some Pakistani companies had supplied goods to Russian firms but were not paid.”

However, he said that the ministries of the two countries had agreed to draft an agreement to resolve this issue.