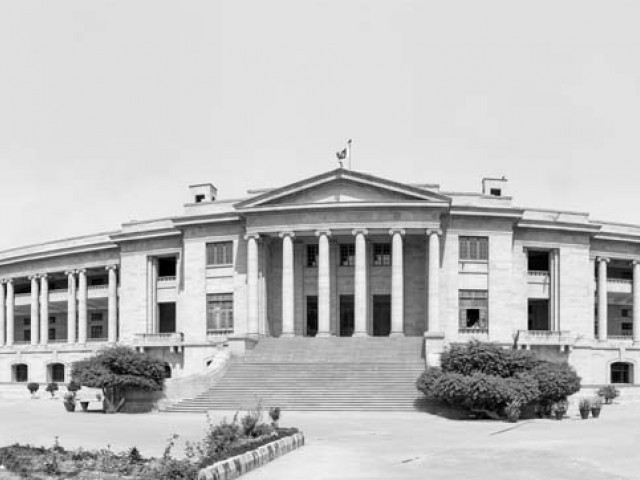 Discrimination and challenges faced by female lawyers in the legal profession in Pakistan. PHOTOS: ARIF SOOMRO

Article 25 of the Constitution of Pakistan states that all citizens are equal before the law and there shall be no discrimination on the basis of sex. However, the very judicial system that is required to implement this has failed to observe it within its own jurisdiction. The Asian Development Bank has spent more than $350 million (a little over Rs35 billion) on judicial reforms and has maintained that more women should be appointed as judges but currently there are six female judges in Pakistan and none of them have been appointed as Supreme Court judge. Although more and more women have been graduating with a degree in law recently, few seem to adopt the profession after a brief stint at a law firm. Many complain of gender discrimination in the male-dominated field and switch to a profession that is more accepting of women. While a local degree is a setback for both male and female law graduates, women who do manage to land a job in the legal profession never manage to obtain an all-round experience and always end up behind the desk with paperwork. According to advocate Ismat Mehdi, who runs Ismat Law Associates, the amount of work that was required from her during her initial years in the field was twice the amount assigned to male associates. Only when she proved her worth by handling the excessive workload did her seniors take her seriously, she says.

Advocate Sara Shah, manager of the legal department at Pakistan Telecommunication Company Limited, narrates a similar experience about her first job as a legal associate. Her male boss deliberately assigned her more work by stating that this was the only way for women to learn. Senior partners mainly offer research work and drafting of suits to women, reveals advocate Shah. This puts female law graduates at a disadvantage since holding briefs and pleading cases before the court is the essence of litigation, she adds. Furthermore, for lawyers to succeed in the profession, they also need to network. This, in turn, helps the firm grow its client base and generate more income. According to Darakshan Sheikh Vohra, an equity partner at Liaquat Merchant Associates, men have bigger social circles and therefore, more opportunities to network with clients as compared to women. This inevitably encourages firms to prefer male partners over female partners.

With limited opportunities to grow, many women leave the profession or enter the profession as in-house lawyers, says Nausheen Ahmad, corporate secretary and head of the legal department at Habib Bank Limited. The gap between female and male partners is, therefore, evident  in most law firms. This is because “male partners at law firms also feel insecure when promoting women,” says advocate Shah. But according to advocate Naheed A Shahid, who is the sole proprietor at Azizuddin & Shahid Law Associates, fewer women make it to the top due to social and cultural limitations. Male partners fear that they might leave for personal reasons, such as marriage or to start a family, she says.

Divisions within the legal profession How female judges are judged

At courts, women face an equal number of challenges. Despite the limited number of female judges appointed at superior courts, a judicial policy announced in 2009 by then-chief justice Iftikhar Muhammad Chaudhry had no mention of reserving seats for female judges. “Women are rarely appointed as Supreme Court or High Court judges. This is because the criterion of assessment for women has deliberately been made difficult,” says advocate Shah. Male lawyers even avoid their cases being heard before Justice Ashraf Jehan at Sindh High Court of Karachi, she claims. The reason for this is that male lawyers are not confident about her legal knowledge and distrust her competence to decide cases on the basis of merit, she adds. There have been times when female judges have passed judgments in favour of women at lower courts, especially in family law cases, says advocate Hussain, citing a possiblereason for distrusting female judges. But when it comes to the treatment of female judges, Hussain says, “Women are prone to verbal harassment at courts from fellow male lawyers and, most of the time, this goes unreported.” Therefore, he does not encourage his family members to enter the legal profession.

Despite 35 years of experience in the field, even advocate Mehdi discouraged her daughter from pursuing a career in law. She agrees that there is rampant gender discrimination at courts in Pakistan. For instance, there is currently no representation of women in constitutional institutions, such as the Federal Shariat Court — which has the power to enact new laws or strike off old ones from the statute books — and the Council of Islamic Ideology, which run parallel to the judiciary. Since women’s views are not taken into account while making or amending laws, this makes them vulnerable on the whole.

Vohra suggests that unless there is change in the mind-set of males and a greater appreciation for the skills female employees bring to the table, there will be no change in how women are perceived in the legal profession. She believes that female employees are far more loyal, hard-working and detail-oriented than their male co-workers, thus making them crucial components in a firm’s team. However, advocate Mehdi suggests that women can improve their standing in the profession by acquiring greater expertise and skills in order to stand out among male co-workers. She encourages women to be more assertive and to confront male co-workers when they behave inappropriately. “No one will do anything, we have to do it ourselves,” she says. “Men will leave you behind no matter how intelligent you are.” Advocate Shah also believes that the main challenge lies in the attitude of female lawyers and judges who do not work hard enough to gain greater skills and knowledge in the profession. While most agree that women must rely on themselves and take matters into their own hands, others recommend seeking justice through the legal system. On the topic of harassment faced by in-house female lawyers, Nausheen Ahmad, corporate secretary and head of the legal department at Habib Bank Limited, says that women must address harassment in the workplace through effective implementation of the sexual harassment law and strict compliance of the sexual harassment code by organisations. This will attract more women to join the profession and help them feel secure, she adds.

Although the future for women in the legal profession appears bleak, Vohra says whether a lawyer is a man or a woman does not make a difference. The client will opt for someone who is knowledgeable, has a professional attitude, shows high level of commitment and delivers results. But for clients to eventually have a choice between female and male lawyers, more female lawyers will need to be employed in the field and be given an equal opportunity to grow. Komal Anwar is a subeditor on The Express Tribune magazine desk. She tweets @Komal1201