Laila caught the eye of the Britis­h luxury fashio­n house when her agents put her forwar­d for a Burber­ry auditi­on
By Web Desk
Published: March 24, 2015
Tweet Email 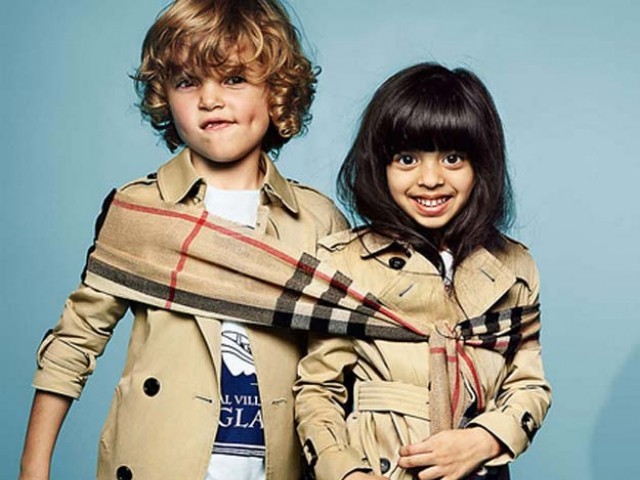 The five-year-old was signed on by a leading children’s modelling agency and caught the eye of the British luxury fashion house when her agents put her forward for a Burberry audition.

“She went for a Burberry audition where she wore their classic trench coat and confidently looked into the camera; that is when I knew Burberry would book her as she looked picture perfect,” her mother Sadia Siddiqui told The Express Tribune. Elaborating on Laila’s personality, her mother said, “Laila has always shown a fierce independence, and a very strong will. She has a natural grace about herself . She started singing at three and joined a theatre academy where she acts, sings and dances.”

“Laila loves her hair as she feels she is a brown Rupunzel. She has a special star quality and is a very happy child who is very firmly grounded, she is a loving daughter, a naughty sister and a good friend to her peers,” she added.

Laila has worked on Burberry’s children Spring/Summer 2015 look book, their commercial and their Winter 2015 campaign.

The five-year-old joins the ranks of supermodels such as Cara Delevinge and Kate Moss who were in a recent campaign of the brand. English footballer David Beckham’s son Romeo Beckham recently made his modelling debut as the face of Burberry.

Laila, however, is not aware of the fame she has gathered and while she continues modelling, she pays equal attention to her studies.

“Laila is unaware of the fame she has gathered and her achievements in the fashion world. She is just happy to see her pictures in magazines,” her mother said.

Doting with pride, Laila’s mother added, “We celebrate Lailas entry into the mainstream high fashion market as London is the fashion capital of the world and Asians are the largest ethnic minority in the UK. However, there are very few Asian faces representing mainstream fashion brands and to our knowledge no Pakistani models has cracked into the competitive world of high fashion modelling.” Laila has a unique look, with her large brown eyes, a small nose and a pouty mouth with long dark thick hair, the five-year-old has everything that it takes to be a fashion model: looks, energy and personality.

Modelling comes to Laila naturally as her mother started modeling at an early age as well. However, Sadia says Laila’s success is not because of her.

“We all knew Laila was different very early on; she loved acting, singing and had this great inner confidence,” Sadia said.

Sadia started her own modeling agency and is now a producer and host of a talk show Achievers on B4U.

Despite her busy schedule, Sadia picks and drops Laila to school, does her homework with her and accompanies her to her shoots.

The five-year-old, whose favourite dish is Biryani, loves spending time with her grandparents in Islamabad every summer, according to her publicist Ammara Hikmat.

“Laila loves getting photographed and picks her own outfits to wear. She is very chirpy and entertains all her mother’s friends who visit their house,” Hikmat, her publicist, told The Express Tribune. Fame also runs in the family as Laila’s grandmother, Dr Tanveer Naim, is not only a renowned Pakistani scientist but also a prominent name in science policy making in Pakistan.

At one time, she was the first female secretary of the National Commission on Science and Technology, officially the highest decision-making S&T body in the country. Dr Tanveer Naim was also voted amongst the 500 most influential Muslims in the world.

Her grandfather, Moeen Jan Naim, has served in the foreign service of Pakistan and was posted in Tunisia as the High Commissioner of Pakistan.