Week 30 of the Premie­r League ended with some major talkin­g points ahead of the final eight games
By Taimoor Siddiqui
Published: March 23, 2015
Tweet Email 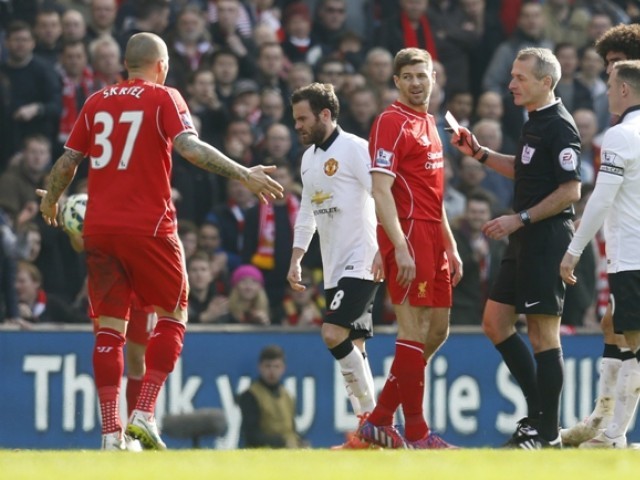 KARACHI: Tottenham’s Harry Kane scored his first ever Premier League hat-trick against an unwavering Leicester side, just days after being called up for the England squad, to become the joint leading goalscorer in the league along with Chelsea’s Diego Costa, who scored one against Hull City to equal Kane’s tally, while Steven Gerrard’s 45-second appearance against Manchester United on Sunday saw the Reds’ 13-game unbeaten run come to an abrupt halt as Juan Mata scored a brace, converting his second goal with a spectacular scissors kick to take Louis van Gaal’s men five points clear of fifth-placed Liverpool.

The Merseyside giants had been on a relentless run, bagging five straight victories since their goalless draw against Everton in February, but it came to an abrupt halt when van Gaal tactically overpowered the Reds on their own turf to strengthen United’s bid for the Champions League spot.

The result means the five-time European champions are the only team in the top seven to have lost this week and trail United by five points as they prepare to take on another top-four rival, Arsenal, at the Emirates.

Olivier Giroud came to the rescue for Arsenal as the Frenchman slotted in two goals in four minutes to establish a 2-0 lead in the first half against Newcastle, while the Toons threatened in the second half but only got one goal to show for their efforts as Moussa Sissoko pulled one back for the home side in the 48th minute. The result maintains the Gunner’s outside hopes for maintaining a title challenge but strengthened their grip on the top-four spot.

Manchester City comfortably secured the three points against a 10-man West Brom side with a 3-0 win at the Etihad Stadium as Wilfried Bony scored his first Premier League goal in the 27th minute, followed by strikes from Fernando and David Silva.

Chelsea avoided a slip-up against a Hull side determined to punish the current league leaders at the KC Stadium. The Blues took the lead within nine minutes through Eden Hazard’s 25-yard strike and Diego Costa’s fine finish from an angle just six minutes later, but two quick-fire goals from Ahmed Elmohamady and Abel Hernandez brought them level before the break. Despite Hull going close on several occasions in the second half, substitute Loic Remy grabbed the winning goal from 12 yards just two minutes after coming on to restore the Blue’s six-point lead at the top of the table.

Southampton maintained their top-four push with a 2-0 win over Burnley at St Mary’s Stadium, while Kane’s hat-trick saw Tottenham skip 4-3 past a relentless Leicester City who are now in deep relegation trouble following four defeats in the last six games.

Everton were the only club to move up the table this week with their 2-1 win over Queens Park Rangers at Loftus Road as goals from Seamus Coleman and Aaron Lennon gave Roberto Martinez’s men some solace after a terrible start to the season, while Crystal Palace’s fine form under manager Alan Pardew continued as they secured a 2-1 win at Stoke after a pulsating afternoon at the Britannia.

Aston Villa’s survival hopes took a dent as Bafetimbi Gomis struck late to give Swansea a 1-0 win at Villa Park, while West Ham routed Sunderland 1-0 at Upton Park to ruin Dick Advocaat’s first match in charge of the Wearsiders.

With the last eight games remaining to be played, the English Premier League intensifies as seven clubs vie for four Champions League spots.