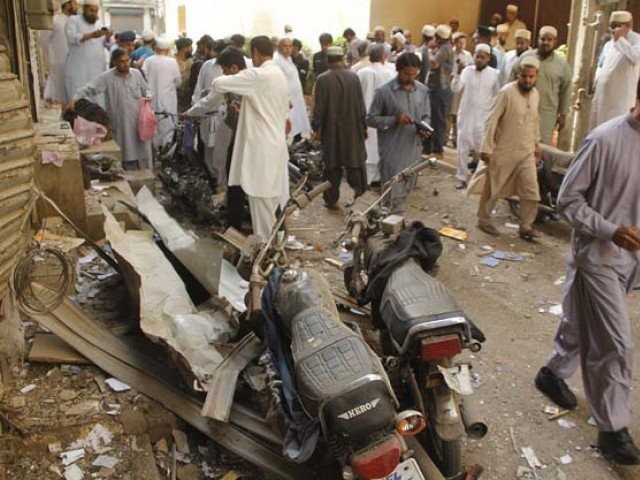 Two worshippers were killed and nearly a dozen wounded in a bomb blast outside a mosque of the Dawoodi Bohra community in the congested Aram Bagh neighbourhood of the metropolis on Friday. The blast occurred around 1:50pm just as worshippers started pouring out of Saleh Masjid after Juma prayers, according to witnesses.

“As soon as worshippers started coming out of the mosque, a bomb went off with a loud bang,” said Osama Naseem, who escaped the explosion unhurt. “Around 10 worshippers were wounded in the blast that whipped up panic and fear among those still inside the mosque.”

Naseem said community members immediately started rescue work and half a dozen injured worshippers were already shifted to the nearby Burhani Hospital before law enforcers and rescuers reached the site. The dead were identified as Shabbir Hussain, 60, a frame dealer at Jama Cloth Market, and Hasnain, 23, who worked at the paper market.

The blast ripped off the shutters of several nearby shops, smashed windows of residential buildings and damaged half a dozen motorcycles. Police and Rangers cordoned off the entire neighbourhood.

An official of the Bomb Disposal Squad said it was most likely a timed device strapped to a motorbike which was parked opposite the mosque. The police said they have collected the number plate of the motorcycle and identified its owner, who is a resident of the Keamari area. The police added that they have launched investigation with the help of CCTV footage.

No group immediately claimed responsibility, but DIG Abdul Khalique Shaikh said, “We suspect banned militant outfits are behind the attack.”