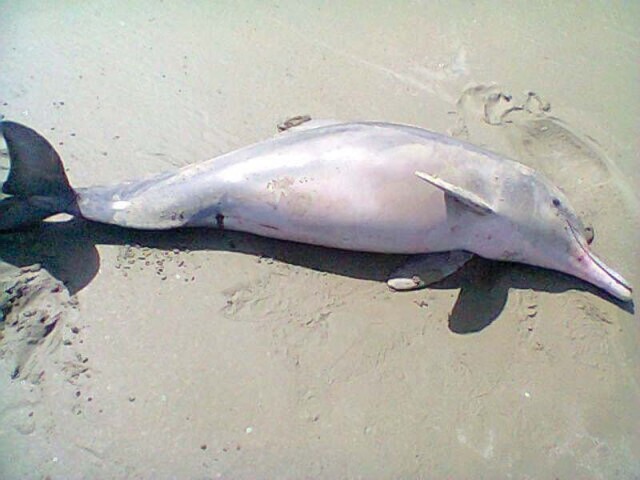 A 5.5-foot-long Indo-Pacific humpback dolphin was found by fishermen at the Sonmiani beach in Balochistan. PHOTO: COURTESY WORLD WIDE FUND FOR NATURE - PAKISTAN

Naseer Ahmed and Tahseen noticed the 5.5-feet-long dolphin beached on the sandy shore and abandoned their fishing trip to rescue it, according to the World Wide Fund for Nature — Pakistan (WWF-P).

The Indo-Pacific humpback dolphin (sousa chinensis) is a coastal dolphin found in shallow waters along the coast, as well as in creeks and lagoons. The International Union for Conservation of Nature Red List categorises it as a near-threatened species.

Sonmiani Development Organisation coordinator Abdul Rasheed explained that around 30 fishermen have been trained to rescue dolphins and other endangered marine species, as well as to collect information about the area’s dolphin population. “A study carried out with the assistance of WWF-P revealed that about 80 dolphins inhabit the Miani Hor lagoon, while a similar number exists in the coastal waters of Sonmiani Bay.”

WWF-P technical advisor Muhammad Moazzam Khan remarked that the Indo-Pacific humpback dolphin was facing serious threats in Pakistan due to the degradation of its habitat, pollution and entanglement in fishing nets. “A resident population of the dolphin used to be found in the Karachi port, but it is no longer present there,” he disclosed, adding that the rescue of dolphins was a result of the untiring efforts of conservation organisations and community-based organisation working in the coastal areas.

In March 2009, around 250 pantropical spotted dolphins were beached in Gadani. Nearly all of them were released safely into the water through the joint efforts of WWF-P staff and the coastal communities.