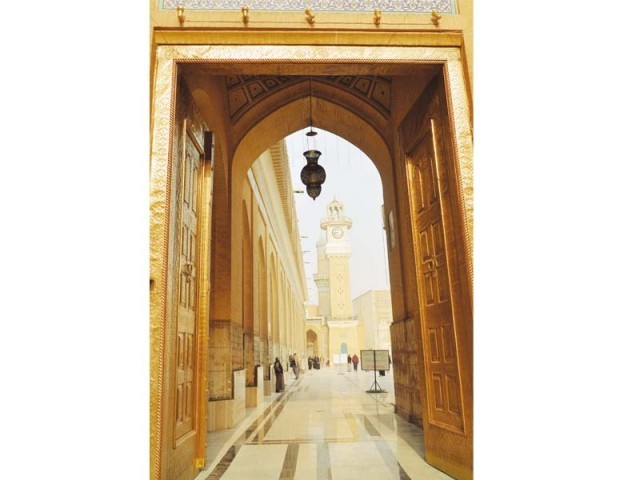 The main gate to the shrine of Sheikh Jilani. PHOTO: AMEER HAMZA

Seldom have I felt as excited in my life as I did in Baghdad, Iraq. I was in the city for the ceremony of Gyarween Shareef, a ritual that marks the passing of Sheikh Abdul Qadir Jilani (RA), a direct descendent of Hazrat Imam Hussain (RA) and Hazrat Imam Hassan (RA), at the age of 91, at the Jilani Shrine. I was alone, without friends or family. But at the shrine, I became part of a larger family of thousands who travelled here from all over the world.

In Pakistan and India, Gyarween Shareef falls on the 11th of Rabi-us-Sani (31st January this year) and believers hold prayer sessions to mark the occasion. In Eastern Africa, prayer sessions are held for a full night, while in other countries, the sessions continue for days. This is in honour of Sheikh Jilani who was known for his vision, honesty and kindness. He is reported to have said, “Feeding people is among the best things a man can do.” The founder of the largest Sufi silsila (spiritual lineage) in the world, the Qadria silsila, Sheikh Jilani is said to be the Sultan of the walis (‘friend’ in Arabic). A man swirls to music played by a group after Friday prayers within the masjid. PHOTO: AMEER HAMZA

Iraq defied my expectations. Yes, there were ever-present threats, sporadic bombings and tight security checks. Hotels are believed to be unsafe and road blocks every few metres hinders your travel from one part of the city to another. As the threat of IS looms, locals and foreigners are rigorously checked. But there were also surprises: the people, despite being desperately poor, were very courteous and took pride in their appearance (you can even spot some policemen sporting neckties). Many here fondly remember Saddam Hussein’s regime, except in Karbala, where the very mention of Saddam would be akin to a death sentence. It was also amusing to see younger Iraqis glued to their televisions, watching the latest Bollywood offerings. Sweet-makers have a field day on the 10th and 11th of Rabi-us-Sani as the world gathers to pay their respects to the Sufi Sheikh in Baghdad. PHOTO: AMEER HAMZA

The shrine remains the de facto centre of Baghdad and the symbolic centre of the Sufi world. The splendid medieval building has a beautiful blue and white dome and is encircled by a large complex to house and feed visitors. The shrine is constantly cleaned and perfume is sprinkled on the grounds to keep the space smelling beautiful. For a weary visitor who had made his way here via Najaf, from Karachi, the shrine was an oasis of serenity. The shrine remains the de facto centre of Baghdad and the symbolic centre of the Sufi world. PHOTOS : AMEER HAMZA

I planned to remain at the shrine for the whole day on the 30th and 31st of January and was given a place to stay in one of the halls associated with the shrine. On the 31st, we awoke to a recitation, in Arabic, before dawn, followed by the azaan. A breakfast spread of Arabic cream, jam or jelly, Arabic unleavened bread, paye ka salan and tea was brought in for the foreign visitors while locals were asked to eat breakfast in their homes. Meals can be sponsored by some donors.

After breakfast, people from all walks of life — men in flowing robes and women in abayas, their babies in their arms — gathered in the main hall of the shrine. Inside the shrine’s masjid, the pilgrims covered their heads with intricately designed, perfumed chaadars and each person waited for their turn to place the chaadar on Sheikh Jilani’s grace. These coverings are kept there for a short while before they are given as gifts to anyone who wishes to have them. One chaadar remains on the grave throughout the year and is placed there by a select number of Syeds (descendants of Huzoor Ghous-e-Azam Sheikh Abdul Qadir Jilani (RA)) in a ceremony known as ghusl (ritual washing). Inside the masjid, there is a reverential hush. PHOTO: AMEER HAMZA

Inside the masjid, there was a reverential hush. Outside, joyous locals chanted, “Ya Sheikh Abdul Qadir Jilani (RA)!” Children, wearing their finest clothes, ran around as people gave them sweets and bangles in celebration of the occasion. Locals surrounded us, celebrating the day as Eid, reveling in the sunshine and hugging foreign pilgrims.

As late afternoon approached, the shrine’s premises were crowded. At that moment, the widows of the Iran-Iraq war and their daughters were given priority over others to enter the main room of the shrine to pray. On some days, unaccompanied young men are not allowed into the shrine in order to avoid any harassment of the women. As dusk fell, Kurds from Iraqi Kurdistan descended on the shrine in droves to perform the Sufi ruks all night long. They gathered in a circle, wearing distinctive red amama (headgear) and chanted, twisting and twirling. If a tired dervish fell to the ground, another came forward to take his place. An Arab boy holds a blue flag gifted to him by a Pakistani in front of the shrine. PHOTO: AMEER HAMZA

There is a saying: all roads in Iraq lead to Baghdad, and all roads in Baghdad lead to Sheikh Jilani’s shrine. After the day’s celebrations, it was easy to see why this shrine lies at the heart of the city.

Ameer Hamza is a former curator for Getty Images USA. He tweets @ameerhamzaadhia