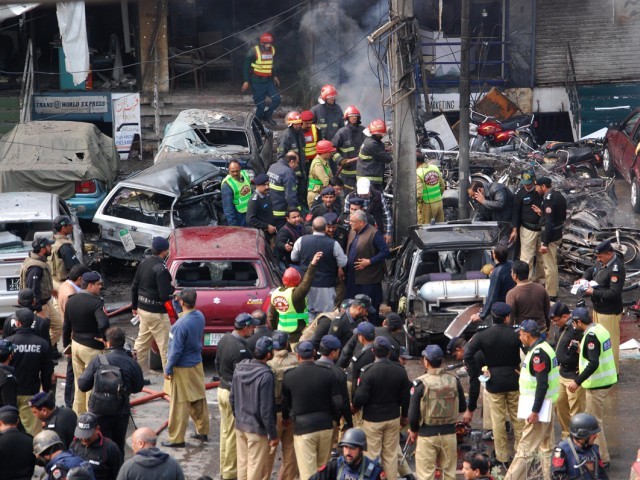 The bomber had struck just metres away from the entrance of Police Lines on Empress Road in the heart of the city. PHOTO: RIAZ AHMED/EXPRESS

LAHORE: Lahore Police has received the geo-fencing information of the suicide bomb blast outside police headquarters at Qila Gujjar Singh, which revealed that attackers were receiving instructions from militants  in Afghanistan.

On February 17, a bomb struck police lines in which six people lost their lives and another 26 were injured. The bomber had struck just metres away from the entrance of Police Lines on Empress Road in the heart of the city.

A police official of the investigation wing told The Express Tribune that after the bomb blast the joint investigation team carried out the geo-fencing of the crime scene which revealed that the terrorists had been in the Qila Gujjar Singh area for two days and were in contact with an outfit in Afghanistan from whom they were taking directions.

“The target of the terrorist was the police lines which they failed to target with perfection,” he added.

He added that 11 alleged terrorists are in police detention and we are interrogating them.

After failing to get into the Police Lines, the bomber detonated the explosives strapped to his body in front of a nearby multi-storey building that had offices of travel agencies. The fatalities included a sub-inspector and an assistant sub inspector, while most of the injured were passersby – women and children among them.

Read: Morning after: Silence at Empress Road after attack

Earlier, after the attack the TTP’s Jamaatul Ahrar faction said it was behind the deadly attack. The group’s spokesperson Ehsanullah Ehsan said the group dedicated the bombing to all those “who were dragged out of prisons and killed or hanged”.

“We want to make it clear to the rulers that we will take revenge for the blood of innocent Muslims,” Ehsan said in an emailed statement and warned of more such attacks.

The Qila Gujjar Singh police had registered the FIR on the complaint of SHO Rizwan Latif. The bombing came just days after 22 people were killed in a gun and suicide attack on a Shia mosque in the upscale Hayatabad Township of Peshawar.

Lahore has remained relatively peaceful during the TTP’s vicious campaign of bomb and gun attacks, which has left thousands of civilians dead.

But last October a suicide bomber killed 55 people at the Wagah border crossing with India close to Lahore.

I have no faith in the justice of this country: Shafqat Hussain’s mother