Magic of Karachi & Lahore: There's no place like home

Magic of Karachi & Lahore: There's no place like home

How a group of young city-dwelle­rs is making us relive the magic of Karach­i and Lahore­
By Tooba Masood / Vasiq Eqbal / Creative: Maryam Rashid
Published: March 8, 2015
Tweet Email 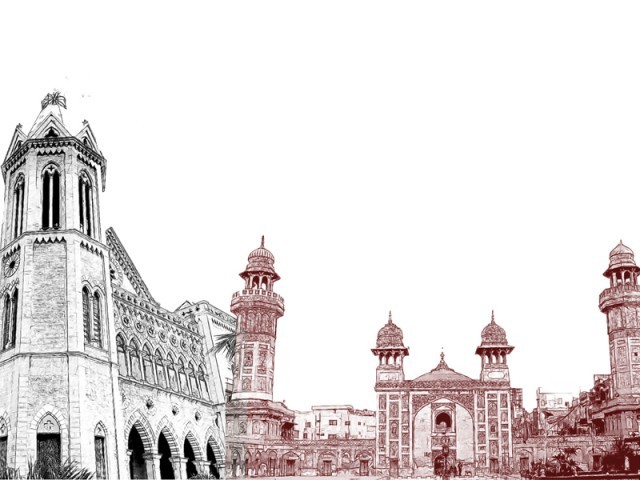 How a group of young city-dwellers is making us relive the magic of Karachi and Lahore. DESIGN BY MARYAM RASHID

Falling in love with a city is easy, but after years of living in it the initial attraction begins to fade. Most people get so caught up in finding their way through a maze of streets every day that they tend to overlook the very features that define their hometown. Blinded by a cloud of black smoke they fail to identify what drew them to the city in the first place. To rekindle that spark once again, one has to take it from the top: become a tourist in their own city to revisit and rediscover its forgotten charms.

Fortunately for the people in Karachi and Lahore, such a tour is already in place. Several passionate individuals have carefully curated a hop-on hop-off sightseeing and culinary tour of their respective city to remind others about what makes their town so special.

A few months ago two young men felt the need to do something for Karachi. The unlikely pair — Bilal Hassan, a doctor by profession and a photographer by passion, and Atif bin Arif, owner of Gulliver’s Travels — was looking for a way to repair the city’s damaged reputation by showing people a more peaceful side to Karachi. “Karachi gets a lot of hate for being a city with security risks but a local Karachiwala has a certain bond or attachment with the city,” says Arif. So together they realised that that the best way to get people to shake off the negativity would be to initiate the city’s first guided tour. Arif was at work when it hit him that he could give his business a new dimension and simultaneously promote local tourism. He heard about Hassan and his through a mutual friend who recommended that he take a look at the pictures Hassan had uploaded on his Instagram account from his many walks around the city and to pitch the idea to him. The two clicked instantly when they started discussing their common interest — a shared love for Karachi — and decided evoke the same emotion among others. To kick-start things, Hassan says they laid the groundwork for the tour by visiting historical and religious sites in Karachi to see how receptive they were to letting people in. And once they were confident they had gained access to enough sites for a full day’s tour, Hassan took up the challenge to prepare a formal itinerary and Arif volunteered to deal with logistics. This is how the Super Savari Express came to be. Jahangir Restaurant in Saddar where the group stops for breakfast. PHOTO: BILAL HASSAN

According to its Facebook page, the Super Sawari Express is a tour company that will take one around the alternative and unseen sights of Karachi using local and ethnic modes of transportation, such as a traditionally decorated minibus. Although their concept was unique, it was difficult to initially get people on board to support the tour, says Arif. He had several meetings with caretakers and officials at churches, temples and mosques to convince them to open their doors to tourists. “I used to ask them to give me one valid reason to say no,” he shares, adding that eventually many relented and granted them permission. Show me the city

The Super Sawari Express, in essence, is a complete guide to Karachi. But to thoroughly enjoy this tour one must wake up early on a Sunday and reach Gulliver’s Travels, behind Karachi Gymkhana, by 7:30am as the tour starts at 8:00am sharp. Hassan is the tour’s official guide and Arif keeps a protective watch over the group. From Karachi’s pre-partition structures such as Frere Hall to Sobhraj Chetumal Terrace — a place built by a Hindu businessman for women to enjoy their evening strolls — and Karachi Parsi Institute to Flagstaff House, the tour recaps what makes the city special. It also includes religious sites, such as the Zoroastrian fire temple, Tahiri mosque, Swami Narayan Temple and Trinity Church — places that are representative of Karachi’s treasured diversity. For those who want to share little bit of the city with their significant other, Super Savari Express also offers special tonga (horse carriage) rides. This includes dinner and an evening under the open Karachi sky.

On Thursday evenings, the company also organises a food tour along Burnes Road during which the group indulges in a wide selection of local foods, including, nihari, kebabs and rabri for dessert, with the added bonus of touring Karachi from on top of a bus. And on Saturdays they book special tours for groups. Currently, they are planning on expanding to other cities of the country, including the federal capital.

Tooba Masood is a senior subeditor for The Express Tribune Karachi desk. She tweets @tabahitooba

While the Super Sawari Express made its debut as a guided city tour last year, the Adil Lahorei Cultural Club (ALCC) earned a reputation as the country’s first official city tour in 2012. Initiated by Adil Lahorei, a young search engine optimisation officer, the tour follows a similar path: taking locals and foreigners working in the city to explore Lahore’s historical heritage and vibrant culture. However, there is one variation: everyone must wear the traditional kurta lacha to truly get in the spirit of things. As part of the ALCC tour tourists get a chance to prepare lassi. PHOTO CREDIT: VASIQ IQBAL Adil always felt the Walled City had an edge over other cities in Punjab and decided to promote it through tourism. Initially, for six years he struggled to source founds for the project but eventually decided to take matters into his own hands and started the club with a small sum of money. He devoted a blog and a Facebook page to get the word out about ALCC and the rest, as they say, is history.

The ALCC conducts full-day tours (from 8:00am to 5:00pm) on weekends but they operate with a flexible itinerary. Most tours start form Old Tollinton market and proceed to Pak Tea House, Mall road, Hall road, Lakshmi chowk, Gowalmandi (for a spot of breakfast), Guru Arjun Nagar, Shahalmi chowk, Lohari Gate, Bhati Gate, Delhi Gate (for a stopover to visit some of the historical palaces), the Shahi Hamam, Wazir Khan mosque, followed by a boat ride on the river Ravi and a visit to the tomb of Jahangir, Royal mosque and Lahore fort before concluding with dinner at either Anarakali food street or Fort Road food street. Several tongas are especially hired for each tour which takes a group of 20 to 25 individuals at a time. For families which prefer shorter tours, they are given the option of a customised package and pick and chose the destinations they wish to visit. On one particular tour people from half a dozen nationalities got the opportunity to taste local food and play cricket with the children in the streets of Gawalmandi. Currently the tour has become so popular that it has expanded to include some destinations beyond the Walled City and is managed by a four-member team. Just to be extra cautious, the police is also informed about the groups whereabouts so they can be provided with some security. Sharing his experience, a young banker, Gul Akram says, “Despite having lived in Lahore, I was not familiar with many of its historical locations. But this tour reintroduced me to my own city.” Akram adds that the tonga ride, while dressed in traditional clothes, is perhaps the tour’s main attraction. Even Julia Kathryn, a Canadian teacher and blogger, who took the tour was all praises for it. “Many thanks to these people for helping me view this [part of the] world with more compassion and less reaction,” she says, adding that it’s the hospitality of the people and not so much the mountains and the scenery that makes Pakistan a meaningful place to visit.

Vasiq Iqbal is a Lahore-based photojournalist and a travel writer. He tweets @vasiq_eqbal