Tipping the scale of fashion retail

Tipping the scale of fashion retail

Teleno­r Fashio­n Weeken­d comes to a close with a showca­se of collec­tions set to fire up the summer season.
By MEHEK SAEED / Creative: Umar Waqas
Published: February 23, 2015
Tweet Email 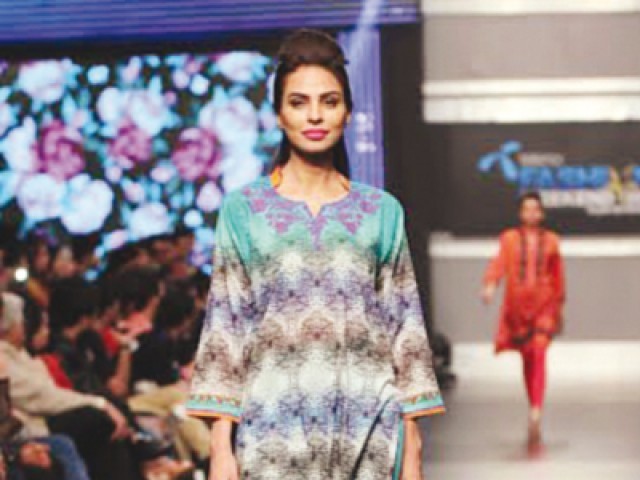 Telenor Fashion Weekend comes to a close with a showcase of collections set to fire up the summer season.

The finale is usually the sharp end of any fashion showcase but it was the sharped up who drew attention on the second and last day of the biannual Telenor Fashion Weekend. Dated February 21 and held at Royal Palm, the event saw a host of retail collections gearing up to set the upcoming summer season ablaze. With Zara Peerzada on the hosting front and Hassan Sheheryar Yasin as the choreographer, the showcase was well-rounded. The Express Tribune gives a round-up of the fashion hits and misses of the evening. Titled ‘Spring Garden’, the collection was based on rotary and digital prints, and embroidered lace on lawn and cotton. The colour palette boasted hues of blue, red and yellow, but wasn’t experimental enough for the ramp. Tony & Guy’s styling was on-point, with hair pushed back and bright lips, which pulled each the look together. The showcase comprised collections by four of the institute’s budding designers. Harris Masood’s ‘Dear Dorothy’ collection attempted to highlight the evolution of the 21st century’s pop culture icons.  The biggest hit of the collection would have to be the vivacious pink skirt. It was well-structured and flattering — it may not appear on the racks, but fashion-forward ladies will definitely want to be seen in it. Next to showcase was Momal Zia, whose collection explored the rawness and aesthetics of Nepal honey-hunters’ lives. With a great combination of green and grey, the collection was a visual treat. Then, Asrar Yaqoob presented a unique collection titled ‘The Art of Camel Decoration’, inspired by the art created by nomads in Cholistan, which focuses on carving hair on camel skin. This was skilfully depicted by using laser-cut on leather, dark floral and geometric prints. Last, Hassan Riaz presented his line ‘Affrontement Avec L’ Agony’, which was based on aspects of the human experience, such as agony. Out-of-the-box and conceptual, Riaz put on a laudable show. They put forth their collection titled ‘Hipster’, with clothes for both men and women. The women’s range, disappointingly, featured ill-fitted tops with ruffled sleeves, with a top that read  ‘London, New York, Paris’ and the model wearing a bandana of the US flag. It seemed like they were trying too hard with these numbers. The only saving grace of the collection was the casual pants in florals for women. The collection for men, however, was preppy and well-styled. The collection paid homage to the military with hues, such as camel, olive and tan. The line boasted clever usage of these colours, all neutral and can be worn both independently and paired with just about any hue. But be that as it may, Urban Culture’s collection failed to leave a mark. Although the line had some great structured jackets and pants with intricate cuts to its credit, it was low on the oomph quotient. The salon’s trend show featured designs by Fahad Hussayn, HSY, Republic by Omar Farooq, Republic Women’s wear and Sublime by Sara. Attempting to bring out individuality and personal evolution through hair, they predominantly played around with texture, recreated braids and pony tails, and accessorised hair with metallic elements and feathers. They also put forth sleek and sports luxe styles, thereby making it a well-rounded display of trends. Seeking inspiration from the splendour of the abodes of Mughal emperors and hand-woven fabrics in villages, the collection juxtaposed the extravagant with the moderate. The line featured bold colours and intricate designs, giving the evening a spectacular finish. Raj at Yas was one of the best collections of the evening, featuring a combination of prints in structured blazers and pants for both men and women. It was styled with bags that matched each outfit. It’s hard to pick a favourite, but the monochrome crop-top and pants with a yellow blazer, worn by Sadaf Kanwal, was a stand-out. The show opened with Outfitters ‘Castaway’ collection, which designer Faiq Hussain centred on a wearable, boho-chic summer look. Stonewashed ripped jeans, fringe kimonos, floppy hats and cool colours were the defining features of the collection. Flowers in the hair, mirrored aviators, and what resembled Hawaiian flower necklaces, completed the look. Mehreen Syed’s cool aura in denim skinnies and a floral top was the collection’s winning look. Overall, Outfitters showed great promise for translating its collection from the ramp to the rack.

A ‘Sumystical’ night of Qawwali music