Pakistan vs WI: A Caribbean storm of catastrophic proportions

Pakistan vs WI: A Caribbean storm of catastrophic proportions 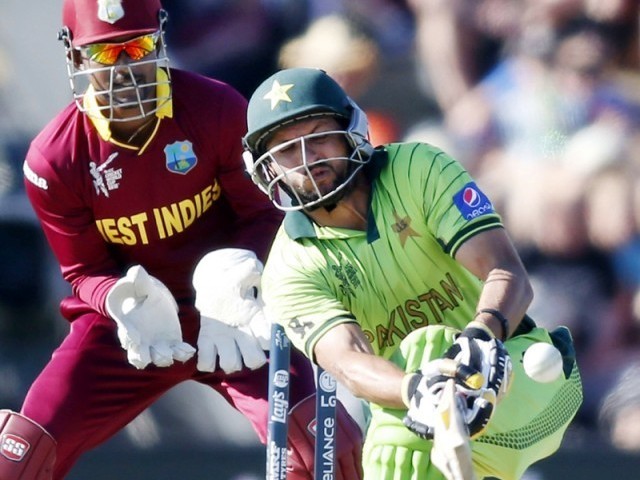 The Christchurch contest between Pakistan and the West Indies lasted for 89 overs but in reality the match was settled in a nine over passage of ‘madness’ that started at the backend of the West Indian innings and ended as Ahmed Shehzad laboured his way back to the pavilion with the scoreboard reading 1-4.

During the passage of ‘madness’ the West Indians walloped a bunch of young and old boys clad in green with an assault first with the bat which was then replicated within the first 19 deliveries of Pakistan innings— surely the ghosts that visited Haris Sohail’s room in Lincoln last month didn’t scare the player/s even half as much as the seemingly disunited and fractured bunch of Caribbean cricketers.

The hard work of the Pakistan bowlers in the opening overs of the innings was ruthlessly undone by the belligerence of Andre Russell who one felt had a personal score to settle with Sohail Khan and Wahab Riaz— 89 runs were plundered off the last six overs, Russell smoked three sixes in one Sohail over alone— the 49th of the innings.

A target of 311 runs was  already at least 60 more than the maximum capacity of Pakistan batsmen but not even the most adventurous of punters would have betted on the calamity that decimated the team inside the first four overs.

Nasir Jamshed, Younus Khan, Haris Sohail and Ahmed Shehzad lasted 19 balls and scored one run between them— in 13 balls, Russell had amassed 42! Umar Akmal and Sohaib Maqsood’s rebuilding effort only delayed the inevitable as the duo threw away their starts mid-way.

Pakistan needed a miracle and despite the mayhem at the start there was enough time to script a fairytale turnaround— Akmal and Maqsood though felt content with their individual achievements and failed to show the strength so common in the lower-orders of all major teams engaged in top-flight cricket these days.

The cluttered mindset of Pakistan’s think tank was exposed even at the start of the match through the composition of the playing eleven.

The West Indians are infamous for their struggles against quality spin bowling and in the 2011 World Cup, Pakistan spinners had spun them out for a paltry score and while the pitch in Christchurch was surely a lot different to the Mirpur turner of 2011, yet the decision to ‘rest’ leg-spinner Yasir Shah must have shocked the West Indian camp.

Sans Yasir, Misbah once again took the field a bowler short. Last time Pakistan had gone in an ODI with the luxury of four bowlers— the Black Caps pummelled them for 369 runs, the match was played in Napier on February 3— was that harrowing lesson forgotten so soon?

As Russell ruthlessly razed Sohail and Wahab in the death overs, Misbah searched for answers, he simply had no bowlers to fall back on.

Misbah and Waqar opted for the extra batsmen but at 1-4 even 11 batsmen won’t have won them the match.

The tactic of cushioning the most fragile and incompetent batting line-up among the top eight teams in the world at the cost of thinning the bowling resources— a traditional strength of Pakistan is not working, but one feels the captain and the coach need at least one more World Cup to figure this out!

There must be some reaction to the butter fingered fielders too who dropped no less than five certain chances in the West Indian innings but if Mr.Luden (Trainer and Fielding coach) puts in the extra yards with the players leading up to the clash with Zimbabwe he might endure the wrath of the players again.

Meanwhile in other news, PCB Chairman Shaharyar Khan remains confident that his team will bounce back in the remaining games.

Re-verification process: Mobilink achieves half of its target