The fire began at the 50th floor of the 79-floor tower. No deaths have been report­ed so far
By AFP
Published: February 21, 2015
Tweet Email 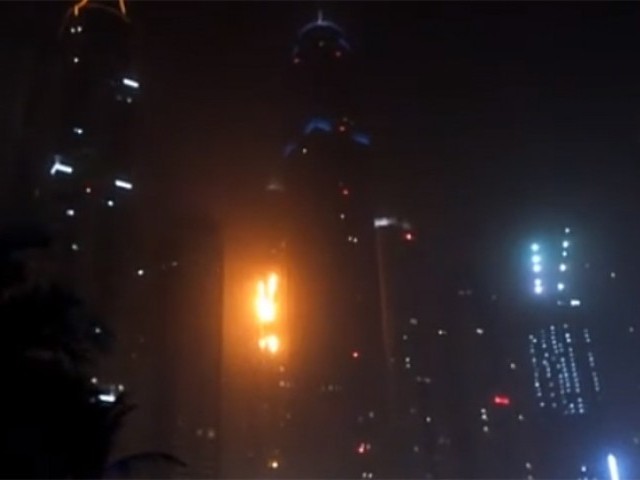 A screengrab from a video posted online of the plaza on fire.

DUBAI: A huge fire engulfed one of the tallest towers of the Gulf emirate of Dubai early Saturday. The blaze has gutted the upper part of The Torch residential skyscraper, which stands 336.1-metre (1,105-feet) high, triggering evacuation of nearby towers in the Dubai Marina neighbourhood. https://twitter.com/rolarolzaa/status/568910595795189760 The fire began at the 50th floor of the 79-floor tower, the Gulf News daily said on its website citing a resident, adding that people were being rescued with smoke inhalation injuries. No deaths have been reported so far. https://twitter.com/MoBroRic/status/568935672712601600/photo/1 Dubai, known for its skyline of skyscrapers, has seen fires at towers in the past. In 2012, a huge blaze gutted the 34-Tamweel tower in the nearby Jumeirah Lake Towers district. It was later revealed to have been caused by a cigarette butt thrown into a bin.