Jolie writes that she has visite­d Iraq previo­usly but has seen nothin­g like the suffer­ing she witnes­sed this time
By IANS / Web Desk
Published: January 28, 2015
Tweet Email 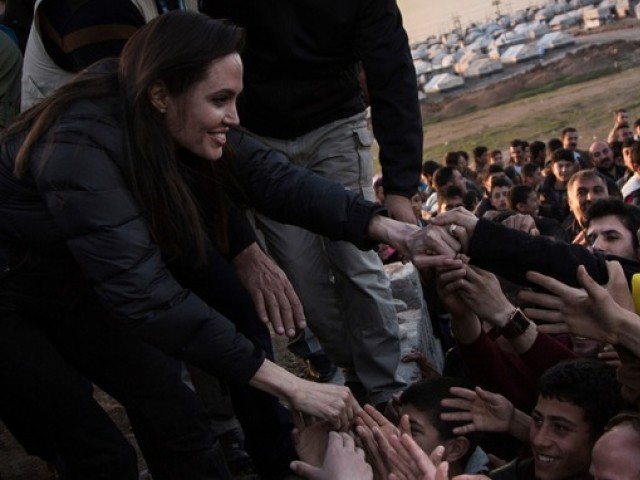 Angelina Jolie at the refugee camp in Iraq. PHOTO: REUTERS

Days after Angelina Jolie was photographed on a visit to northern Iraq, the Unbroken director has written an impassioned opinion article in the New York Times about her trip.

“I have visited Iraq five times since 2007, and I have seen nothing like the suffering I’m witnessing now,” the 39-year-old actress wrote in the opinion piece, published by the newspaper on Tuesday.

Jolie, who is a special envoy of the United Nations High Commissioner for Refugees and co-founder of the Preventing Sexual Violence Initiative, described the devastation she witnessed in the refugee camps, and called for action to help the millions of displaced Syrians and Iraqis who no longer have a home.

“For many years I have visited camps, and every time I sit in a tent and hear stories. I try my best to give support. To say something that will show solidarity and give some kind of thoughtful guidance. On this trip, I was speechless,” she added.

“What do you say to the 13-year-old girl who describes the warehouses where she and the others lived and would be pulled out, three at a time, to be raped by the men? When her brother found out, he killed himself,” Jolie wrote.

“How can you speak when a woman your own age looks you in the eye and tells you that her whole family was killed in front of her, and that she now lives alone in a tent and has minimal food rations?”

She spoke of how the UN refugee agency was set up to assist people in returning to their houses after conflict, stating that the Syria’s neighbours undergo an “unsustainable burden” and they should be provided with more assistance.

“It is not enough to defend our values at home, in our newspapers and in our institutions. We also have to defend them in the refugee camps of the Middle East, and the ruined ghost towns of Syria,” the actor wrote.