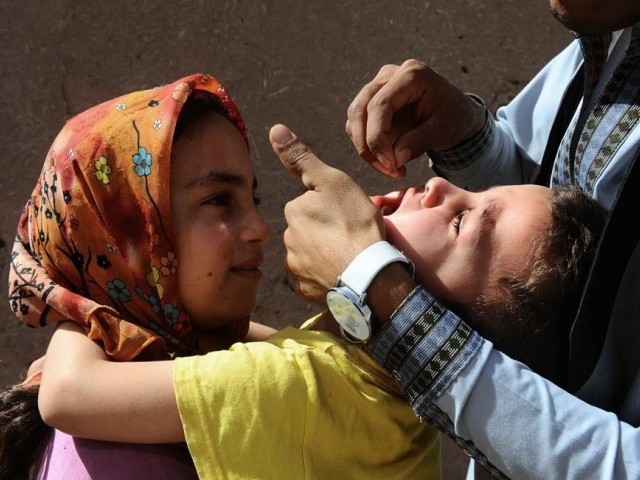 Though meant to eradicate nine vaccine-preventable diseases, the decision for renewed efforts come in the wake of a record-breaking 303 polio cases in 2014 and persistent measles’ outbreaks.

Talking to The Express Tribune, Tarakai said there were still many technicalities which would be ironed out in the near future. The letter itself confirms that the joint initiative will be carried out in the districts of Peshawar, Charsadda, Mardan, Swabi, Nowshera, Karak, Kohat, Hangu, DI Khan, Bannu, Tank and Lakki Marwat; Frontier Region (FR) Bannu and FR Tank; and Khyber, North and South Waziristan agencies (NWA, SWA). “These 14 areas constitute about 88 per cent of the global polio cases—248 out of 303 cases are from these areas,” a senior PTI official who has worked on both Sehat ka Insaf and Ittehad campaigns had told The Express Tribune on Thursday.

“Approximately, three million children from K-P and 300,000 from Fata will be vaccinated under Sehat ka Ittehad,” said Tarakai. The campaign — which is to start in February — will be undertaken in all 14 areas simultaneously. “The governor’s desire was to hold it all together, and we agreed,” added Tarakai.

The plan is to cordon off the 14 blocks and immunise children with the support of the police. With the exception of one round of inactivated poliovirus vaccine (IPV), the rest will be orally administered doses of the polio vaccine, said the K-P health minister.

“Robust communication and social mobilisation strategies, especially designed in context of local socio-cultural backgrounds, and Pukhtun dominant population shall be there to support operational aspects,” reads the letter. It goes on to add that the K-P government will work in close coordination with Tarar’s ministry, the National Emergency Operation Centre, the World Health Organization, and Unicef.

While the original initiative was fielded by PTI leaders, Sehat ka Ittehad comes at a time when allegations of vote fixing and resignations have dominated the narrative between ruling parties at the Centre and K-P.

“The future of our children is above politics,” said Tarakai. “Politics have been set aside; this has never happened before.” After the 18the Amendment, he said, “We could have done it alone but why work in silos?” Lauding Governor Mehtab, the Peshawar corps commander and CM Khattak, Tarakai said all three representatives have been very positive about working together.

The provincial minister from Awami Jamhoori Ittehad Pakistan added, “We might have different stances and might stand on containers, but for the future of our children, we will do anything.”

The Fata Secretariat, the provincial government, the centre and the Pakistan Army are all partners in this initiative, the Secretariat’s spokesperson told The Express Tribune.