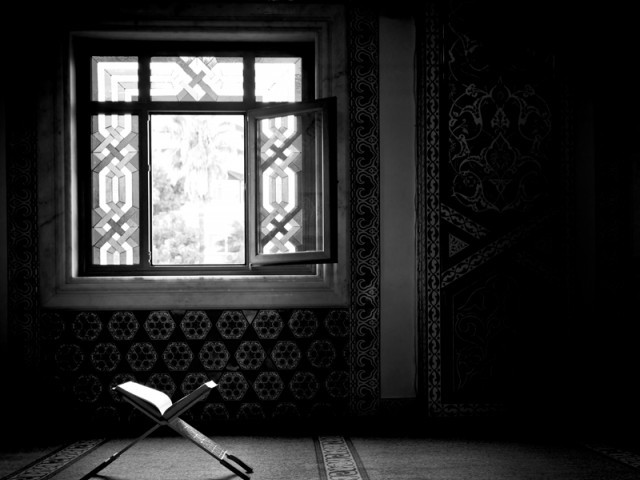 Reforming madrassas into places of tolerance and learning is one of the key steps for combating terrorism in Pakistan. PHOTO: MUHAMMAD JAVAID

Sitting cross-legged in a wide hall with his books sprawled all around him, 14-year-old Osama Siddiqi, a student at the Mahdul Quran madrassa, located in Chatha Bakhtawar, Islamabad, is one of the estimated 3.5 million students who are pursuing a religious education in one of the approximately 35,337 madrassas affiliated with the Ittehad-e-Tanzeemat-e-Madaris Pakistan (ITMP) — an umbrella of the five schools of Islamic jurisprudence. Washed in shades of deep red, the Mahdul Quran madrassa is one of the most beautiful buildings in town where hundreds of students from various cities acquire a contemporary and religious education which includes subjects such as Urdu, English and Mathematics along with memorising the Holy Quran by heart. Along with registered madrassas like the one Siddiqi is enrolled in, officials working in interior and religious affairs ministries share that there are also nearly 8,249 madrassas operating across the country that are not registered with the ITMP, interior ministry or the provincial home departments. The rapid increase in the number of unregistered and unregulated religious seminaries across Pakistan continues to pose a problem as they are often linked with extremist propaganda-based teachings that have become the breeding ground for intolerance, hatred and terror.

Let’s get the numbers right

According to data provided by the provincial home/auqaf department to the ministry of religious affairs on December 30, 2014, there are 13,000 registered madrassas operating in Balochistan, 16,000 in Punjab, 3,136 in  Khyber-Pakhtunkhwa (K-P), 2,800 in Sindh and 401 in Islamabad. The number of unregistered madrassas operating in the country are a different story altogether. According to a senior official at the ministry of religious affairs, there are nearly 4,135 unregistered madrassas in K-P, 2,411 in Punjab, 1,406 in Sindh and 266 in Balochistan. Some 31 madrassas are also unregistered in Islamabad, all of which are built on encroached land. The officer added that these madrassas have never cooperated with government officials when it comes to registration with some of the major hurdles being differences over curriculum, beliefs and thoughts. In a recent briefing to the Parliament, interior minister Chaudhry Nisar Ali Khan also shared that most of these unregistered madrassas were affiliated with mosques that had been established by either individuals or religious organisations.

In order to reform and regulate madrassas, it is critical to first understand the reason behind their rapid growth over the past decade. Madrassas fill up the vacuum in the provision of basic services such as education by the state. “The government is unable to educate poor children and no one cares. Only madrassas give them free education,” says Muhammad Bilal, an Islamabad-based resident whose son is a student at the Mahdul Quran madrassa. Dr Manzoor Ali Azhari, head of the Institute of Religious Education in Taxila, further corroborates this fact stating that it is only lower-income students who go to these seminaries. “If the government supports these students, I am sure they can make a difference,” he adds. Problems arise in non-registered seminaries when there is no check on the literature being taught there, a cleric shared on the condition of anonymity. “Students of some of these unregistered seminaries are sitting ducks being misguided by anti-state forces,” he says. The claim is not completely unwarranted as intelligence agencies have identified a few madrassas suspected of having links with terrorist organisations. On the other hand, defence analyst Dr Ayesha Siddiqa feels that the issue was not just limited to unregistered madrassas in the country. “Seminaries of any kind are central to the extremist-militant nexus,” she says. The need for madrassa reform and the revision of existing curricula picked up heat in the wake of the Peshawar school massacre when Prime Minister Nawaz Sharif listed it as one of the steps on the National Action Plan formulated to combat terrorism. A committee headed by Chaudhry Nisar was set up to look after the registration and regulation of seminaries and the government was also advised to cease funding for madrassas from Iran, Saudi Arabia and the United Arab Emirates. Even though reforming madrassas into places of tolerance has been deemed the need of the hour by most political parties, the government and seminaries’ representatives are at loggerheads in this debate. In a recent meeting, certain representatives of madrassas, including Mufti Muneebur Rehman, Mufti Muhammad Naeem, Qari Muhammad Hanif Jalandhari and other prominent religious leaders criticised the government for “singling them out” for reforms. He lamented that madrassas were told to submit their financial sources but there was little they could do since banks refused to open accounts for them — something he had written about repeatedly to the State Bank of Pakistan governor and finance minister, but to no avail. Ulema Council Pakistan chairman Tahir Ashrafi claimed that there was a lack of communication between the media, diplomats and government officials on the issue. “Madrassas are open; anyone can visit them,” he said adding that not only were all madrassas registered but were also being audited.“Everyone points a finger at our fund-raising mechanism. How come no one questions the government about the money they get from the US?” added founder of Jamia Binoria Karachi Mufti Muhammad Naeem, while refusing to disclose the main source of funding for his madrassas. Moreover, minster for religious affairs Sardar Yousaf argued that the government was bent upon implementing its vision of ‘modern madrassas’ without doing the required homework. “Why is everyone pointing fingers at us for being the breeding ground of militancy and terrorism in the country,” says Qari Hanif Jalandhri, secretary of Wifaqul Madaris al Arabi General. “The people related to madrassas are also citizens of Pakistan and love it as much as any other countrymen.” Students from various cities come to the Mahdul Quran madrassa, located in Chatha Bakhtawar, Islamabad, where they are given a religious and contemporary education. PHOTO: MUHAMMAD JAVAID

The president of Tanzeemul Madaris Ahle Sunnat Mufti Muneebur Rehman further argued that the government had never been serious about reforms. He cited the example of 2002 when funds worth Rs5,759 million went to waste because the education ministry was unable to utilise them for madrassa reforms. “I still remember that former minister for education Zubaida Jalal had promised to provide us with 100 computers for our madrassas back in 2002. I am yet to receive those,” he says. Similarly, a groundbreaking agreement signed by the government and ITMP in 2010 opened up opportunities for thousands of madrassa students to get a modern education both in Pakistan and overseas, says former secretary religious affairs Vakil Ahmed. The agreement stated that the five boards of ITMP would be recognised like other boards through an act of Parliament or an executive order and linked to the ministry of education. Moreover, it prohibited teaching/publishing of any literature by madrassas that promotes militancy or sectarianism and laid groundwork for a more inclusive curriculum that included comparative studies of other religions along with compulsory contemporary subjects. Senator Rehman Malik who signed this agreement in 2010 as the interior minister at the time, said that it was a comprehensive agreement between the clerics and the PPP government but could not be presented to the Parliament due to certain reasons such as a shift in Pakistan’s counter-terrorism strategy and the launch of a military operation against Tehreek-e-Taliban Pakistan in Swat and tribal areas. He, however, admitted that neither the government nor the clerics took the agreement too seriously as their attention was immediately diverted to the military operation and support of armed forces. But Mufti Naeem dubbed these repeated failings in the past as lack of political will and expressed similar apprehensions with the approach right now as well. Knee-jerk reactions do not lead to sustainable solutions

According to Haris Khalique, a writer and poet, it is impossible for the government to just close down madrassas in the absence of a universal public education system. “There will be no change until we revisit our entire education policy,” he says, proposing that in the short run, the curriculum of the madrassas should be regulated and their teaching practices should be monitored by a competent state authority. Amir Rana, executive director of the Pakistan Institute for Peace Studies, also feels that although there is no specific mechanism of banning any organisation, the government can review its policy towards banned outfits and re-examine their behaviour. He added that the government should review the curriculum of the madrassas to change the mindset of the students there if it wants to revamp the system.In the medium to long run, however, every child must be provided with a basic education by the state and there should be no parallel systems of education headed by individuals or organisations. Zahid Gishkori is a 2014 Alfred Friendly/Daniel Pearl fellow and a national correspondent for The Express Tribune. He tweets @ZahidGishkori