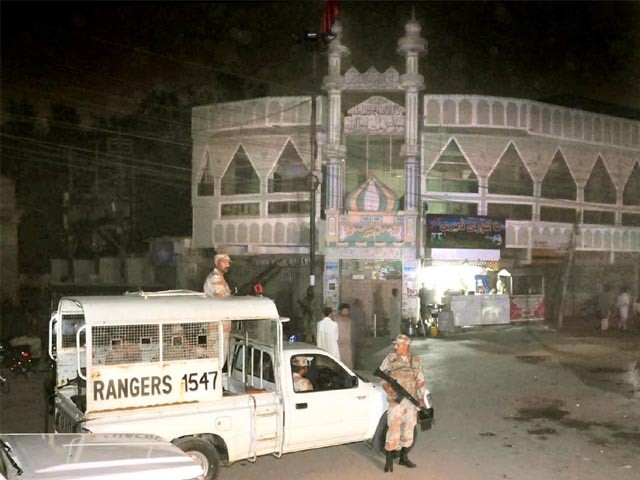 ANP claims it is a sting operation against the party. PHOTO: MOHAMMAD ADEEL/EXPRESSS

Rangers personnel launched multiple raids in the city on Thursday evening and arrested dozens of people, prompting protests from the Awami National Party (ANP) which declared it a sting operation against the party.

Spokesperson Major Farooq Bilal said the operation against ‘criminal elements’ was launched at around 6 pm in several parts of the city on Thursday. Major Bilal dispelled television reports that claimed the operation to be against terrorists, saying, “We are pursuing people belonging to different criminal networks.”

He added that the Rangers did not receive any specific threat or intelligence, but that the operation was planned. He declined to give the specific number of arrests made so far.

Around 500 activists of the ANP have been rounded up, according to the party’s acting general secretary Sindh Bashir Jam. “This is a target operation against the ANP it seems,” Jam said, adding that his men had been picked up from all Pakhtun-dominated areas of the city, including the locality near PIDC called Sultanabad, New Karachi, Frontier Colony, Sher Shah and Baldia Town.

He said the detained activists include senior members of the provincial division of the party.

Bashir Jam said the ANP supports a crackdown against all criminals even if they belong to a political party. “But an operation should not be launched to single out one party,” he said, adding that it seemed the whole exercise was being carried out to appease a rival political party in Karachi.

Meanwhile ANP Sindh president Shahi Syed, who is currently out of town in Dubai, has sent a message to his party workers to remain calm.

While the ANP claims that only Pashtun-speaking persons and ANP supporters are being picked up, Mohammad Saqib looked frantically for his 17-year-old brother Aqib, who is also allegedly being held by the Rangers. “He’s just a teenager who went to meet his friends at Habib Public School near PIDC after his evening tuition classes,” Saqib said, adding that no one in their family belongs to the ANP.

Saqib was told that his brother was picked up when two men fleeing the operation from the nearby Sultanabad area jumped into the school building. “They arrested all the young kids inside,” he said. Till the filing of this report, Rangers personnel refused to confirm or deny that Aqib and other young men are in their custody.