‘Not every murder is a target killing, romance is also to blame’

‘Not every murder is a target killing, romance is also to blame’ 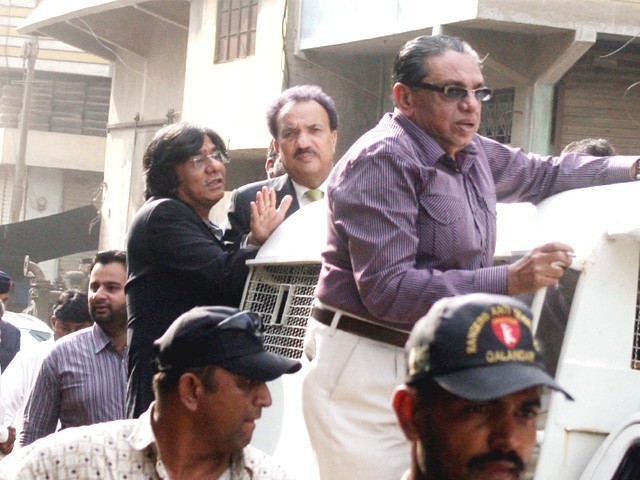 Rehman Malik hangs by the frame of a police van. PHOTO: IMRAN ALI

KARACHI: “Not every killing in Karachi is a target killing,” said Federal Interior Minister Rehman Malik while talking to journalists at the Jinnah International Airport on Saturday.

“Forty people have died in fights over boyfriends and girlfriends,” said the minister, adding that the murders of people over personal disputes are also [wrongly] labelled as target killings.

Hanging by the frame of a police van, Malik also toured Shershah market with provincial ministers and industrials and asked its traders to re-open their businesses on Monday.

At least 28 check posts are being set up in Shershah to maintain peace and provide security to the traders, said Malik. The government will provide traders with complete security and “strict action” will be taken against the Lyari peace committee or any other group found to be involved in the Shershah incident in which 13 people were killed, he added.

The interior minister announced compensation for the families of the people killed in the Shershah attack and also assured them that their children will be given jobs in FIA, NADRA and the police department.

“The government is with you. No one can dare to force you to pull your shutters down,” Malik added, assuring the traders – who had kept their businesses closed since October 19 – that the government will take action against extortionists.

“Many [criminal] groups are active in Karachi. However, the government will not let them disturb peace in Karachi,” he said, adding that a new extortionist group has been identified and will soon be caught and exposed before the media.

“There was a time when Karachi was peaceful. We are taking action to make Karachi peaceful again but we will keep our strategy a secret. We are arresting those people against whom we have solid proof,” said Malik, who claimed that one of the criminals involved in the Shershah incident had been arrested.

“A covert operation has been launched to stop target killings in Karachi. It would be premature to divulge any information at this stage,” said the interior minister, who also appealed to the media and the people to inform the law enforcement agencies should they happen to come by any information on “anti-state elements”. Action will be taken against these elements within 48 hours, he said.

Terrorist activities in Karachi have shaken the confidence of its residents, said Sindh Governor Dr Ishratul Ebad Khan during a meeting with Malik at Governor House on Saturday.

The meeting was also attended by provincial minister Abdul Haseeb, Karachi Chamber of Commerce and Industry (KCCI) president Saeed Shafiq, Seraj Qasim Teli, Zubair Motiwala and representatives of the Shershah market association. The government must take action against criminals “without any discrimination” to restore the people’s confidence, said Ebad.

Malik assured the traders at the meeting that all the people accused of being involved in the Shershah incident would be arrested. Steps are also being taken to deploy police at the Shershah market on a permanent basis to offer security to the traders, he added. Malik said that he has directed the CCPO Karachi to ensure that extortionists to not threaten Karachi’s business community.

“We have almost solved the case and will soon reveal all the facts before the people,” Malik said, while thanking Muttahida Qaumi Movement (MQM) chief Altaf Hussain for his support in maintaining peace in Karachi.

“We are in constant contact with the MQM leaders. They are our friends,” Malik added. “We will put an end to the extortion culture in Karachi by taking decisive steps against the extortion mafia. Action will be taken without considering political and personal interests,” said the interior minister.

The government is against drone attacks, which are “counter-productive and challenge the sovereignty of the country,” said Malik. The Senate and the National Assembly have also opposed such “covert” operations, he said. “We are in favour of a war against terrorism but at the same time we want [to maintain] a friendly relationship with all our neighbours,” he added.

WITH ADDITIONAL INPUT BY APP/PPI/ONLINE