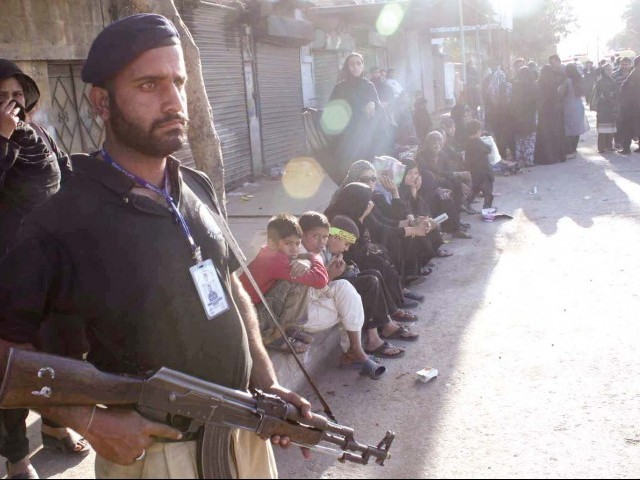 Law-enforcement agencies have employed extra security measures which include an ‘explosive weapon detector’. It can detect any explosive material within three to 30 seconds. PHOTO: FILE

KARACHI: A ‘special protection group’ has been formed, which will include members of the Shia community, to act as a reserve force during Muharram processions.

This group includes a rapid reserve force and this is the first time a large number of Shias will join it, said DIG West Sultan Ali Khwaja. He was speaking to the media at a basic coordination meeting with the Rangers, ulema and community members in Gulberg Town.

Khwaja said that the inclusion of community members will help in sweeping and securing the area, as well as with any follow-ups if required later. In addition, he suggested the use of at least 20 to 25 cameras in large processions to keep regular checks on people’s activities and movements.

The police plans to deploy a total of 5,000 security personnel for the 107 imambargahs. It is expected that 1,500 majalis will be held and 200 processions will pass through the west zone in the first 10 days of Muharram.

According to Khwaja, there are at least nine imambargahs which are slotted in the high-profile category A in terms of security. Category B has 73 imambargahs and the rest are put in category C.

A member of Hyderi Imambargah in Orangi Town, Syed Shahid Hussain Zaidi, pointed out that the largest procession from their town on Muharram 9 used the Qasba Morr route. “Last year, we had identified four sensitive points on the procession’s route, including Qasba Morr, and even then a planted device exploded just as we were crossing the junction,” he said.

The law-enforcement agencies have employed other security measures as well, which include an ‘explosive weapon detector’. It can detect any explosive material within three to 30 seconds, said the DIG. He added that as the police have insufficient weapons but that they will be coordinating with the Rangers and using their equipment.

Khwaja dismissed the use of sniffer dogs as a security measure this year because he felt they may be inappropriate during a holy procession unless permitted by the ulema. Referring to the efficiency of mobile jammers, he said that “jammers have a maximum range of about 200 metres while large processions usually spread over nearly two kilometres”.

Jafaria Alliance Pakistan additional general-secretary Syed Shabbar Raza told The Express Tribune that their organisation can never be completely satisfied with the security measures. “We were satisfied then [Ashura attack] and look at what happened. When the CID building, GHQ and even Data Darbar and Abdullah Shah Ghazi shrines are not secure then what options are we left with? The police also seem helpless.”

Regardless of the financial and human losses, Raza added that they are unwilling to limit or curb their “Azadari”. He argued that the government’s focus is more reactive than proactive.

“The real issue is tracking down where all this explosive material has come from? Why aren’t intelligence agencies successful in tracking down the terrorist routes?” he questioned. He pointed out that even if security agencies managed to identify a suicide bomber at a checkpoint, there can be up to 200 people in queue within close proximity.

Jafaria Alliance Pakistan is also making its own arrangements, such as parking at a significant distance away from the procession route, installing security alarms, walk-through gates and cameras.

On December 28, 2009, a suicide bomber targeted the country’s largest procession of Shias on MA Jinnah Road and killed at least 40 people. Despite the attack, the procession continued towards its destination but riots and arson attacks followed immediately afterwards.

In June this year, six men managed to release four of their accomplices from police custody after they attacked the security personnel with hand grenades in the city. The four accused were being tried for the Ashura attack.