Damb: Caught in the moment

Damb: Caught in the moment 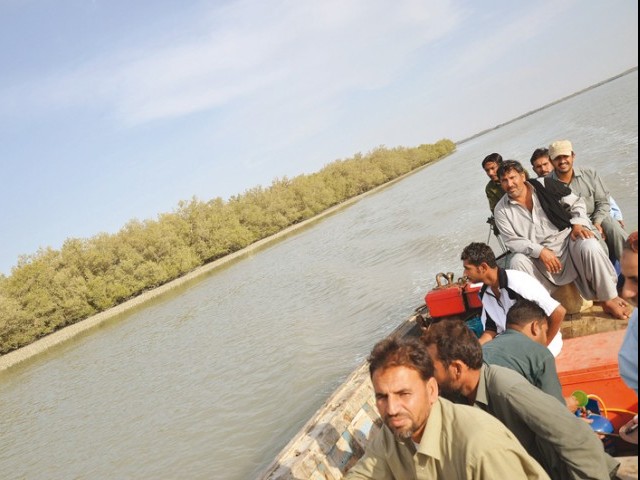 A group of hunters, fishermen and tourists survey the Damb mangrove forest, which is home to countless species of crabs, migratory birds, local birds and small animals. PHOTOS: AMEER HAMZA

Several travel destinations within Pakistan go unnoticed and unexplored due to our fear of the unknown. Only few are adventurous enough to take to the road in pursuit of new experiences and even those who do usually venture towards the north and east of the country. However, if you are in the mood to explore, Balochistan too offers a fair share of attractions that can be rejuvenating and culturally enriching at the same time.

After speaking to a few Pashtuns and locals from Damb village of Sonimani, Balochistan, our group of six adventure enthusiasts was convinced that the region is certainly worth a visit. However, when we finally set out on the road there were only three of us, including a local. As we sped along the smooth RCD highway, we didn’t even stop for a cup of chai due to the mounting excitement and two hours later, we were in Damb. Cooking the day’s catch of hunted birds and prawns purchased from a nearby boat. Eating amidst the cool breeze and the shadow of the mangrove jungle is a must-have experience. PHOTOS:  AMEER HAMZA The hunted birds being prepared for a meal by the host. PHOTOS:  AMEER HAMZA

Upon reaching our destination, we were immediately captivated by the village’s thriving fishing industry. Anchored before us were around 150 fishing boats, some of which were being washed, greased and repainted. As per local rule, commercial fishing is prohibited between the 8th and 15th of every month — due to a rise in water level and consequential low catch — but when the conditions are favourable, the fishermen cast their nets and pray for a rewarding catch. Fazl-e-Amin, our guide, informed us that due to the village’s small population of around 3,000 inhabitants, men from across Sindh, Punjab and parts of Khyber-Pakhtunkhwa are hired to assist in the fishing, sorting, packaging and transportation of the catch for export. He further added that locals who own trawlers pay the fishermen in advance, which is always 80% of the catch. All catch, as a result, is directly handed to the owner of the vessel, who then gives a portion to fellow villagers. It is, therefore, no surprise that the villagers’ diet during the winter months (since fishing is banned during the monsoon season in summer) comprises primarily of seafood. Over the course of our two-day trip, we too indulged in plenty of fish over lunch and dinner. A hunter loads his gun while scanning the sky for a target.  PHOTOS:  AMEER HAMZA

Our first day was spent exploring the area during which we found out that the region is blessed in more ways than one. Accumulation of the wind-blown silt during the summer months results in the formation of loess — combination of sand and silt — which develops into fertile soil. These sand dunes form a prominent feature of the landscape and house a number of species of crab and snakes. One of the area’s top attractions is to climb the tall dunes and observe or photograph the glorious sunset with migratory birds in the backdrop.

The following day we woke up early, grabbed our cameras and packed snacks for a fishing trip. At 8:00am we boarded one of the smaller fishing boats and set out on our adventure maneuvering through the thick mangrove forests teeming with migratory birds and insect life. To our great joy, the locals were aware of the importance of mangroves — protection against significant flooding and a breeding ground for fish — and, hence, the water was pollution-free. But the joy was short-lived when we learnt that hunting is carried out in the area — part of the Miani Hor in Lasbela district which is yet to be officially declared Pakistan’s first marine protected area — despite a ban. The road less travelled: THE ROUTE TO DAMB

One of the men in the boat, with a rifle slung across his shoulder, was scanning the skies with rapt attention for birds and ended up shooting at least 10 of them. To our horror, he said that he would return at night to hunt more as birds cannot fly or get away in the dark. Since the World Wildlife Fund office in the area had closed down, many locals seem to have taken advantage of the situation. Afraid to criticise our host’s actions, we maintained silence over the subject and out of courtesy the game meat was later eaten over lunch along with freshly-caught fish and prawns sourced from a neighbouring boat for Rs350/kg. As the water receded after 3:00pm, we sipped on our final tea with the locals and took one last round around the mangrove forest before heading back to the shore. Our trip had sadly come to an end but we promised the locals we would return with a larger group — the great company, hospitality and rustic food at Damb is definitely one of the simpler pleasures everyone should experience.

Ameer Hamza is a former curator for Getty Images USA.