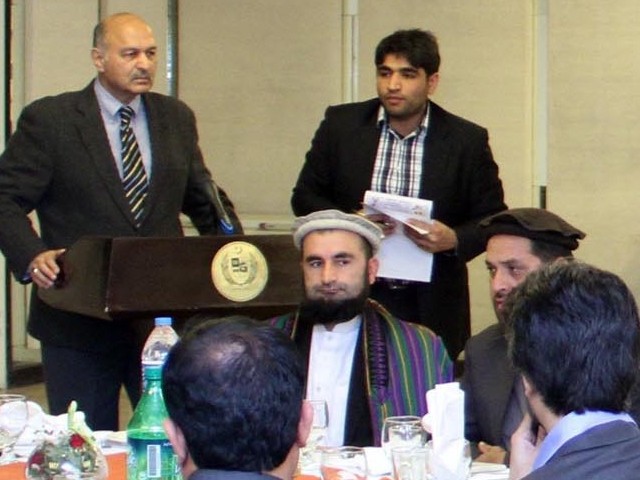 Mushahid Hussain said that the new regime in Afghanistan is more earnest than ever to address terrorism and militancy. Without unity and effective coordination, he said, this challenge cannot be overcome, he added. PHOTO: INP

The Pak-Afghan Parliamentary Security Dialogue will be held over a two-day period.

A 16-member Afghan parliamentary delegation arrived in the Pakistani capital on Monday. The high-profile sessions, which were initiated for the first time in October 2013, began with the visit of the Senate Defence Committee of Pakistan to Afghanistan.

This is now the reciprocal visit amid a changed scenario in the region, particularly after the new regime in Kabul and withdrawal of the North Atlantic Treaty Organisation (Nato) forces from the war-torn country after 13 years of its combat mission.

At a welcoming luncheon meeting, the head of the Senate Standing Committee on Defence, Senator Mushahid Hussain Syed called for increased bilateral cooperation to combat terrorism, the common enemy of Kabul and Islamabad.

“There is a paradigm shift in Pakistan’s approach, bidding goodbye to notions of ‘strategic depth’ as well as drawing distinctions of ‘good/bad terrorists,’” he noted.

Focusing on the importance of Pak-Afghan ties, Mushahid said, “Pak-Afghan relations are of paramount importance in the Pakistan foreign policy and there is a complete consciousness among all Pakistani political parties for a peaceful Afghanistan,” adding that in the coming New Year more bilateral cooperation regarding security issues and military-to-military relations is expected.

“The national poet of Pakistan, Allama Iqbal, had predicted nearly 80 years ago that peace, stability and prosperity in Asia would be interlinked with a peaceful and prosperous Afghanistan,” said the senator referring to Iqbal’s poetry.

Mushahid Hussain said that the new regime in Afghanistan is more earnest than ever to address terrorism and militancy. Without unity and effective coordination, he said, this challenge cannot be overcome, he added.

Leader of the Afghan parliamentary delegation, Senator Baz Mohammad Zurmati, also spoke on the occasion and assured full support of his government to root out terrorism. He also condemned the tragic school incident in Peshawar, saying that the Afghan people were shocked over this brutal act.