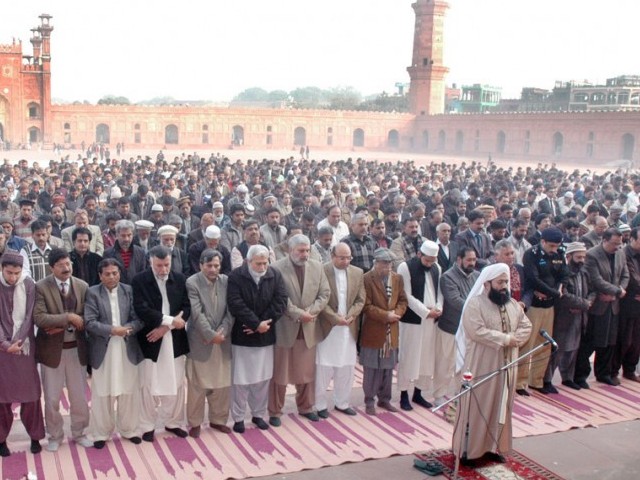 In absentia funeral prayers being offered for the victims of Peshawar school attack in Badshahi Mosque in Lahore on Wednesday. PHOTO: NNI

LAHORE: Of the students killed in Peshawar on Tuesday, five were buried in their ancestral graveyards in Punjab on Wednesday.

Muhammad Tahir,15, a student of Class X was buried in village Kot Abdullah of Nankana on Wednesday. Tahir was only brother of his three sisters. DCO Nankana, DPO, MPAs Malik Tariq Zulqarnain Dogar, Tariq Bajwa and others participated in his funeral prayers.

In Kamoki, 16 year-old Umair Arshad, student of class IX was buried in Habibpura Bhatawala grave yard. Umair’s father Hawaldar Muhammad Arshad said that his son wanted to become an officer in Army but his dream will now remain unfulfilled.

Class IIIV student Shahzeb was buried in his village of Qilla Kallarwala in Pasroor Tehsil of Sialkot.

Khushnood, another student of class IIIV, was buried in Dogriwala village, Daska Tehsil of Sialkot. Khushnood’s elder brother Aftab, who was a student of class X, had suffered injuries in the attack.

Hamid’s father Saifullah Khan said that they will not bow down before terrorists and will face them with bravery.

In absentia prayers were offered for the victims were also offered in many parts of the province.