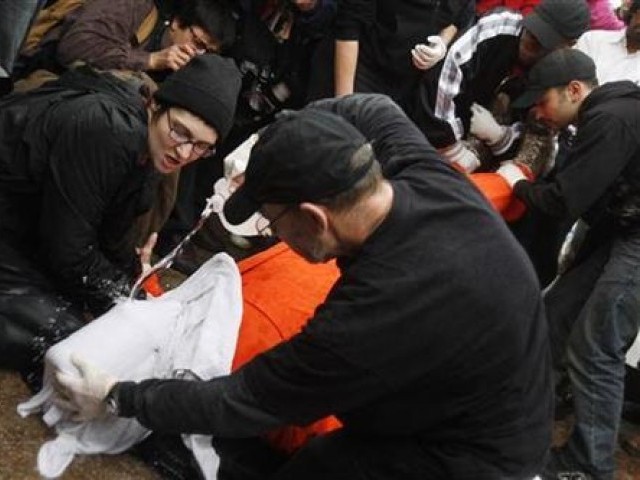 ISLAMABAD: Afghans joined the global community to denounce the US Central Intelligence Agency’s (CIA) use of brutal interrogation techniques on prisoners as cited in a report presented to the American Senate on Tuesday.

Former Afghan Taliban prisoners held at Guantanamo Bay in Cuba and Bagram airbase in Afghanistan also complained of torture during their days in detention.

One of the first to slam the US intelligence agency was Afghanistan President Ashraf Ghani. “CIA officials and their contractors have disregarded all human rights,” he asserted. “They have trampled on US laws and on ethics,” Ghani said in Kabul on Wednesday. “We want the number of Afghans tortured to be revealed so we can act to restore their respect and rights.”

He added one of the most painful revelations of the report was that some innocent individuals had been subjected to brutality. “Their innocence has even been proven,” he pointed out.

The Senate report opened up some old wounds and refreshed unpleasant memories among those Afghans held by the US.

The Afghan ambassador in Pakistan during the Taliban regime, Mullah Abdul Salam Zaeef spent nearly five years in Guantanamo after he was picked up from his Islamabad residence in late 2001 and handed over to US authorities.

“The brutal tactics of the officials at Guantanamo included the use of force and torture apart from hurling insults at inmates,” he told The Express Tribune via Skype. “They used to collect information through prohibited means. I was subjected to torture on several occasions and was not allowed to sleep for a whole month,” Zaeef said.

“They (CIA officials) used to insult prisoners by shaving their head and mustache. The same was done to me to extract information. I was kept in solitary confinement for five months,” he claimed. “There was just a steel bed and not even a pillow or a blanket,” the former Taliban diplomat said.

Former President Hamid Karzai also threw his weight behind Ghani’s stance on the CIA torture tactics. In a statement, he said such actions fuel terrorism in the region.

The Afghan Taliban reacted angrily to CIA’s “barbaric treatment” of prisoners and said the agency was involved in “war crimes.”

“Recognition of crimes against humanity has exposed the United States. It is painful to know that there are still American torture cells in some main bases of Afghanistan,” Taliban Spokesman Zabihullah Mujahid said.

CIA chief John Brennan confirmed, “Some officers used brutal techniques on terror suspects” and there was no proof of useful information extracted from the interrogation.

The US handover of a senior Pakistani Taliban leader, Latifullah Mehsud, to authorities across the Afghan border also sparked criticism as citizens believed the decision violated the country’s sovereignty.

The US military said the handover of Latifullah, a former deputy to Tehreek-e-Taliban Pakistan chief Hakimullah Mehsud, was a bilateral arrangement with Pakistan, adding Afghanistan was not involved.

The decision was seen as part of increased cooperation with Pakistan, but some believed it was in line with the US policy to handover prisoners to their respective countries before the end of 2014. Whatever the motives may be, the handover of the TTP leader has irked some circles in Afghanistan including lawmakers, political analysts, former officials and a section of the media.

The Afghan government has not commented on the handover; however, the presidential spokesperson insisted Latifullah was not in the custody of Afghan authorities.

Former national security adviser Rangin Dadfar Spanta was the first to resent Mehsud’s handover to Pakistan and said the militant should have been handed over to authorities in Kabul.

Afghan lawmaker Abdul Rahim Ayubi also slammed the handover. He told Tolo TV that the US action was against Afghanistan’s sovereignty. Ayubi pointed out that Latifullah had also previously been taken by force from Afghan authorities and transferred to either Guantanamo or Bagram.

Afghans, who seemed divided over the security pact with the US for a longer stay of American troops, showed rare unity in condemning CIA torture techniques and the handover of a Pakistani Taliban leader.

Some Afghans even questioned the status of the Bilateral Security Agreement after what they believe was a unilateral decision taken by the US to return a Taliban leader to Pakistan, thus bypassing a country where he had been detained for over a year.