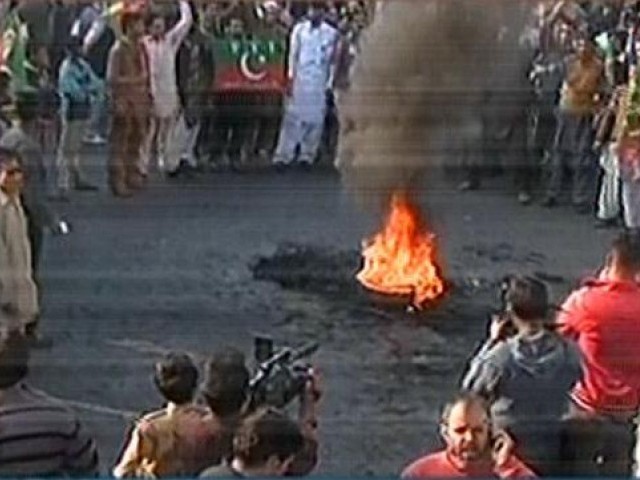 Earlier on Tuesday, PTI supporters gathered at Mall Road in Lahore to offer funeral prayers of Nawaz as protests continued in the city.

The call for a funeral prayer and protest was made by the PTI Monday evening. The funeral prayers were attended by PTI leaders, including Abdul Aleem Khan and Omer Sarfaraz Cheema.

Chants against Prime Minister Nawaz Sharif were heard at the location, while a crowd of PTI workers were seen burning tyres on Mall Road, which had been sealed off and has resulted in heavy traffic.

Addressing a press conference in Faisalabad, the PML-N leader clarified that his party does not have any links with the shooter who was identified by the media as Shahid Ali.

Conflicting reports also identified him as Nadeem Mughal, who is a PML-N worker.

During the press conference, Sanaullah called Mughal in front of the media and asked him to hold a picture of the shooter in his left hand, while holding his identity card in the right.

Further, Sanaullah accused PTI workers of carrying stones and tires with them on the day of the clash and solely blamed them for the violence. “The PTI is following the agenda of vandalism,” he said.

The PML-N leader also poked fun at the PTI chief for calling his workers to his residence.

“I was waiting for you with chai, ras gullay and cream rolls,” he said.

Sanaullah also labeled Imran as the “beneficiary” of the clash and accused him of derailing democracy. Further, Sanaullah stated that he would take legal action against some PTI leaders including Arif Alvi for yesterday’s events.