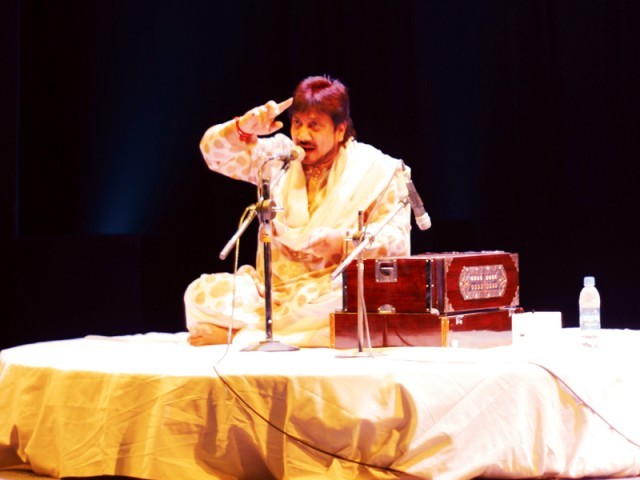 If the first day of the International Music Festival, organised by the National Academy of Performing Arts (Napa), explored world music, then the second day was all about rediscovering the treasures of Pakistani classical music. The evening featured a star-studded line-up with maestros of classical music, such as ghazal singer Ustad Hamid Ali Khan, flutist Ustad Salamat Hussain, and tabla players Ustad Bashir Khan and Ustad Ghulam Abbas Khan. It also comprised a performance by budding vocalist Akbar Ali.

A wide range of rags were performed by the classically trained musicians. Salamat and Bashir set the tone for the second day by performing the raga ‘Chandrakauns’. The opening act was followed by Akbar’s performance alongside Bashir and a Napa faculty member on the harmonium. Akbar, who is the younger brother of noted singer Javed Bashir, rose to fame with his appearance on Indian talent show Junoon Kuch Kar Dikhane Ka. One of the lesser known performers in an otherwise virtuosic line-up, Akbar was able to hold his own at the stage. One of the most memorable performances of the evening was the jugalbandi named Sampooran Qaida between Ghulam and Napa faculty member and sitar player Ustad Nafees Ahmed. Apart from playing this, Ghulam presented his own rendition of a bandish by the father of Ghalib Baksh. The final act of the evening was the most eagerly-awaited one of the festival, as audience members gathered to revel in the performance of legendary Hamid. The ghazal singer, who hails from the famous Patiala gharana, began with raga ‘Bageshri’. His performance faced a minor setback due to the disturbance in the audio, but he showed his class and ability by continuing with the set. He finished with a bandish and tarana of the Patiala gharana.

The veteran musician elaborated upon his decision to conclude his set by presenting the bandish, stating that his musical heritage was a source of ‘pride’ for him. The festival, which goes on till December 7, will now feature performances by US-pianist Kimball Gallagher and The Hathor Plectrum Quartet, who are slated to perform on day three and four of the festival, respectively.

The Leipzig String Quartet from Germany performed on the first day along with Napa students and faculty members, who collectively showcased a laudable fusion of eastern and western harmonies and also played original compositions. Unlike on the opening night, Napa students didn’t collaborate with the guest musicians, only Napa faculty members did.

Hard luck: Pakistan fails to make it to the Grammys