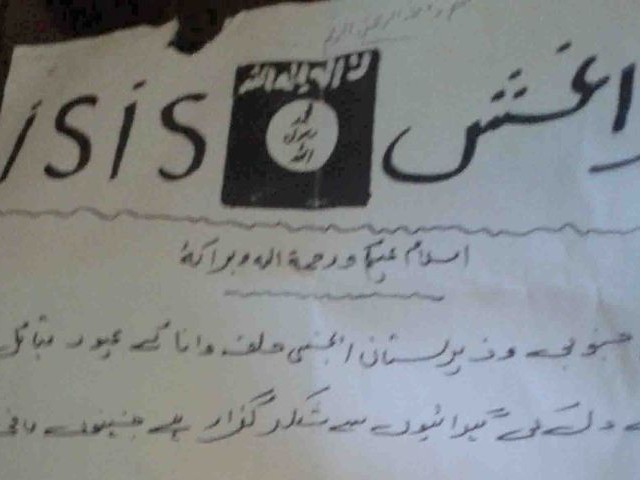 A file photo of a pamphlet allegedly distributed by IS militants. PHOTO: EXPRESS

MULTAN: A senior Multan-based lawyer, who is representing a suspect in a blasphemy case, has been threatened by a shadowy group claiming affiliation with the Islamic State in Iraq and Syria.

Talking to The Express Tribune on Thursday, lawyer Shahbaz Gurmani said unknown gunmen fired gunshots near his residence a night earlier before dropping a threatening letter at his doorstep. The letter, which used an IS letterhead, said Gurmani’s movement was being monitored and warned the lawyer of serious consequences if he continues to pursue the case.

Gurmani said he informed the police of the threat immediately following the incident. Upon his complaint, the police deputed an official to provide him round-the-clock security, he added.

When contacted, Multan CPO Chaudhry Sultan Alam said Gurmani’s security detail now comprised two policemen. He confirmed that one policeman had already been deputed for the lawyer’s security. In addition to that, the police’s Muhafiz Squad would also patrol Gurmani’s neighbourhood regularly, he said.

The official added that an FIR against unknown miscreants has also been registered.