Dara to rule the British stage

Dara to rule the British stage 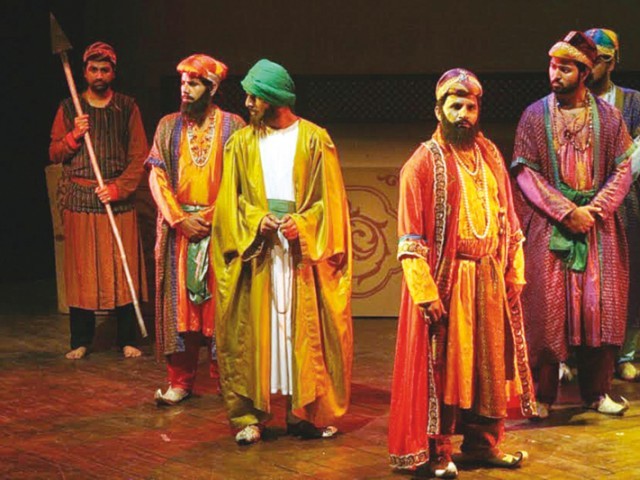 The play is about a succession battle to rule India and the ideologies that have clashed in South Asia over centuries. PHOTOS: FILE

For the first time in the history of Pakistani theatre, a stage play has been adapted by a British production team and will open at the National Theatre in London on January 20.

Originally written by acclaimed playwright Shahid Nadeem, Dara has been commissioned by National Theatre director Sir Nicholas Hytner, directed by associate director Nadia Fall and adapted by Tanya Ronder.  The cast members are well-known British actors, many of them of South Asian origin.

The play depicts the power struggle between two sons of Mughal Emperor Shah Jahan, who built the Taj Mahal in the memory of his beloved wife Mumtaz Mahal. The elder son Dara Shikoh went to battle with his younger brother Aurangzeb to fight for the throne. The battle ended in 1659 when Aurangzeb emerged victorious. According to Nadeem, the play is not just about a succession battle to rule India or a family feud. It is about ideologies that have clashed in South Asia over centuries. The play delves into disputes within Islam, relations with the other faiths and traditions in the region and its consequences on the empire. “This is a major National Theatre production, not touring of an exotic play,” said Nadeem, adding that it was a great opportunity to present Dara’s Islam, a religion of peace, love and beauty, as opposed to Aurangzeb’s narrow-minded and violent interpretation of Islam. With al Qaeda, Talibanisation and emergence of sinister Boko Haram and the Islamic State (IS), the timing could not have been better. “It will also be an opportunity for the British people of Indian and Pakistani origins, to jointly admire and cherish Dara and ponder what course history would have taken if Dara had prevailed over Aurangzeb,” Nadeem adds.

Nadeem explains that the custodians of the Pakistani ideology have projected Aurangzeb as a model Islamic ruler and dismissed Dara as a heretic. “During the Ziaul Haq period, instructions were given to build an Aurangzeb block at each cantonment; Dara’s name was deliberately deleted from historical accounts. My motivation was to reclaim Dara from the historical archives and present the real model of an Islamic ruler, a crown prince who was also a Sufi poet, an artist, a scholar of comparative religion and a passionate believer in religious harmony.”

Ronder has adapted the play to make it more accessible for British audiences, who may not be familiar with Indian history and the story of Dara. “The basic structure and story is the same but there is more emphasis on Aurangzeb’s internal conflict and the childhood events of Shah Jahan’s children. The character of Hira Bai, Aurangzeb’s beloved, also appears on stage,” said Nadeem.

The process of adaptation had its ups and downs, “The story of Dara has complexities. The family relations and the Sharia trial of Dara had to be handled sensitively and tactfully but I am happy to see the final version is not only authentic and faithful to the Urdu original version but will also be accessible to the British audience,” Nadeem said.

Anwar Akhtar of the Samosa Media Project and RSA Pakistan Calling was the production consultant for both Ajoka and National Theatre and has worked closely with the team. Speaking of the relevance of the adapted play in London, he said there is great interest in South Asian culture in the UK. “There are at 1.4 million British citizens with Indian heritage and 1.2 million British citizens with Pakistani heritage in the UK and also a large Bangladeshi community. These communities have very strong ties to South Asia. The play coming to London also completes a circle of UK and South Asian culture, art, diversity, excellence and audience,” he added. The play will run 36 shows until April 2015.

Correction: In an earlier version of this story, the last name of National Theatre director Sir Nicholas Hytner was misspelled and the year in which Dara Shikoh went to battle with Aurangzeb to fight for the throne was incorrectly stated as 1959.