Ghani's visit: Peace and stability in Afghanistan is in Pakistan’s interest, says Hussain

Ghani's visit: Peace and stability in Afghanistan is in Pakistan’s interest, says Hussain

Ghani is on a two-day offici­al visit to discus­s key securi­ty issues in a bid to reset strain­ed ties with Pakist­an
By Our Correspondent
Published: November 14, 2014
Tweet Email 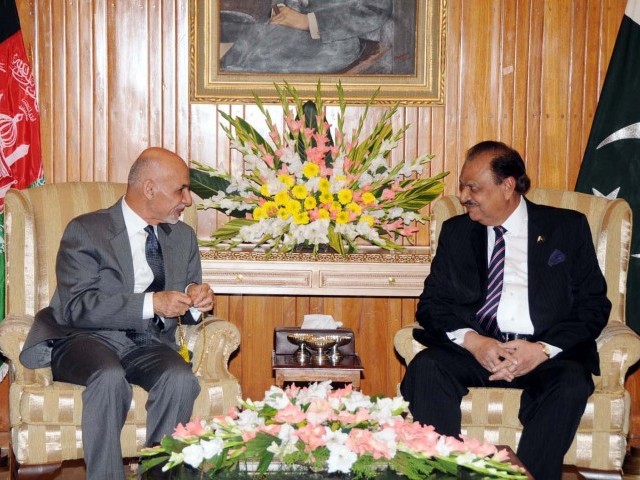 President Mamnoon Hussain (L) in a meeting with his Afghan counterpart Ashraf Ghani at President House on Friday. PHOTO: PID

In a meeting with Afghan President Ashraf Ghani at the President House in Islamabad on the first day of his tow-day tour of Pakistan, Hussain said that close cooperative relations with Afghanistan based on mutual respect and trust remains a high priority in Pakistan’s foreign policy.

According to the president’s press secretary Saba Mohsin Raza, the meeting was held in a very cordial atmosphere and the two presidents discussed multiple issues ranging from from the common challenges to further strengthening economic, trade and people to people contacts for the mutual benefit of the people of the two countries.

Hussain reiterated Pakistan’s commitment to providing assistance in training and capacity building of the Afghan security forces, adding that peace and stability in Afghanistan were in Pakistan’s interest.

Ghani said that his government and the people of Afghanistan desire to further strengthen bilateral relations with Pakistan in all areas of mutual interest.

Afghan President Ashraf Ghani lauded Pakistan’s efforts to combat terrorism and the sacrifices made by the nation after visiting the General Headquarters (GHQ) on Friday afternoon, a press release from the Inter Service Public Relations (ISPR) said.

Ghani said that Afghanistan wants to strengthen security and defence ties with Pakistan, including cooperation in training and border management. He also assured Afghanistan’s cooperation to jointly curb the menace of terrorism.

He was received by army chief General Raheel Sharif and a contingent of the Pakistan Army presented him with a guard of honour.

Watch a video of the Afghan president at GHQ:

Later, the Afghan delegation was also given a detailed briefing on the security situation of the Pak-Afghan border.

Ghani, who is due to meet Prime Minister Nawaz Sharif and President Mamnoon Hussain, was welcomed by Prime Minister’s Adviser on National Security and Foreign Affairs Sartaj Aziz, and other officials.

He is on a two-day official visit for important talks on key security issues and to expand economic ties with Pakistan.

The Afghan president, who is accompanied by a high level delegation of nearly 100 people, aims to seek Pakistan’s help in talks with the Taliban to avoid any instability in the post-NATO Afghanistan.

The Foreign Ministry in a statement said that discussions will be held on all dimensions of Pakistan-Afghanistan bilateral relations during Ghani’s visit.

Other issues on the agenda include trade and economic cooperation, border security, connectivity, energy and people to people contacts.

Further, officials say that Ghani and Prime Minister Nawaz Sharif are expected to briefly speak at a joint presser and to witness a friendly Pakistan-Afghanistan cricket match in Islamabad.

“The visit comes at a historic juncture in Afghanistan, marked by the recent peaceful transfer of power and formation of the government of national unity,” Foreign Ministry Spokesperson Tasnim Aslam said.

“The recent developments in Afghanistan offer unique opportunity to transform the bilateral ties and to build a strong and forward looking relationship,” she added.

Zakhelwal met his Pakistani counterpart Ishaq Dar in Islamabad on Thursday and both agreed to enhance bilateral trade from the existing $2.5 billion to 5 $billion by the next two to three years, the Finance Ministry said.

Pakistan has been providing transit facilities to the landlocked Afghanistan since the 1960s under a transit agreement. Transit issues will also be discussed during the talks.

Pakistan and Afghanistan have agreed to promote bilateral cooperation in economic and trade relations to the benefit of the two countries, Radio Pakistan reported.

The agreement came during a meeting between Ghani and Finance Minister Ishaq Dar and Special Advisor on Foreign Affairs Sartaj Aziz.

Later, Sartaj Aziz stated that Pakistan accords great significance to its relations with Afghanistan and offered the country’s support to Afghanistan’s various sectors.