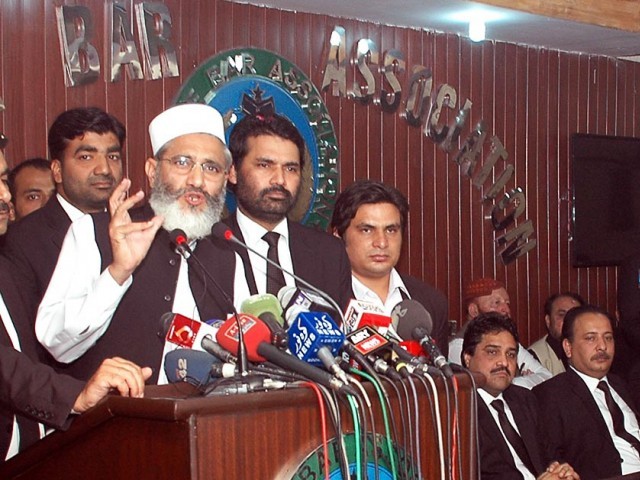 “The government should take steps to ensure that such incidents do not happen again,” he said. PHOTO: ONLINE

LAHORE: The murders of a Christian couple are an attack on Pakistan. No one can be allowed to take the law in their own hands, Jamaat-i-Islami (JI) ameer Sirajul Haq said on Monday.

He was addressing the lawyers’ community at Aiwan-i-Adl to seek their support for his Tehreek-i-Pakistan movement, scheduled to be launched in the coming weeks. “The Kot Radha Kishan murders have tarnished the image of Muslims. The incident has strengthened the hands of conspirators against the country,” Haq said.

“No one has the right to take the law in their own hands. Such acts cannot be tolerated in a civilised society,” he said.

He said Pakistan faced huge problems. “There is no rule of law in the country. Rather, we live at the mercy of our rulers. Pakistan cannot flourish until this situation is changed,” he said. “The common man cannot even get an FIR registered. Several people were killed and scores injured in Lahore, but no case was registered for weeks. People had to stage a sit-in at Islamabad to get the case registered,” he said.

Haq said that people were afraid that another martial law was going to be imposed in the country due to the unrest in Islamabad. “However, many political parties, including the JI, are trying to stop that through dialogue,” he said. Haq praised Pakistan Tehreek-i-Insaf (PTI) chief Imran Khan’s latest offer to the government and his expression of confidence in the judiciary. He said that the education system should be the same for the rich and the poor. “The VIP culture should be eliminated if we really want to bring about a positive change in society,” he said.

He said that the JI wanted a prosperous Pakistan where the poor could get justice and everyone felt secure.

LBA president Chaudhry Ishtiaq praised Haq for his efforts in trying to resolve the political crises in the country.

Earlier, Sirajul Haq had visited the house of the murdered couple in Kot Radha Kishan and met their family members. Pakistan Peoples Party (PPP) Punjab deputy secretary Abid Hussain Siddiqui said on Monday that those behind the Kot Radha Kishan killings should be brought to justice.

Talking to reporters, he said that the murders of the Christian couple must be condemned. “The government should take steps to ensure that such incidents do not happen again,” he said.