IMF team will go to its execut­ive board to delibe­rate releas­e of fifth tranch­e of about $1.1bn, possib­ly before Dec 15
By Web Desk
Published: November 8, 2014
Tweet Email 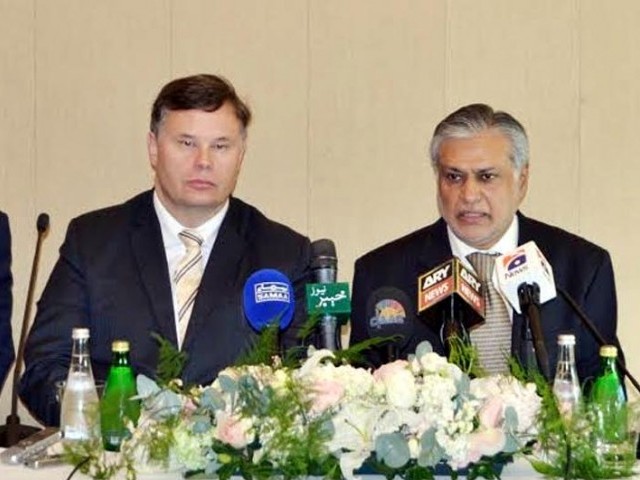 DUBAI: The International Monetary Fund (IMF) on Saturday noted that despite some difficulties, Pakistan’s economic reform programme with the IMF was broadly on track as the financing body and the government successfully completed negotiations on the fourth and fifth review under the three-year Extended Fund Facility (EFF).

The IMF will now go to its board for the release of the fifth tranche of about $1.1 billion, possibly before December 15 under the $6.64 billion programme.

“The completion of the fourth and fifth reviews is indicative of government’s commitment in implementing structural reforms in the areas of taxation, energy, monetary and financial sectors as well as public sector enterprises,” Finance Minister Ishaq Dar said while addressing the media in Dubai at the conclusion of negotiations with the IMF team which spanned almost 11 days.

“Our challenges remain numerous but we are determined that we will remain on track in achieving the objectives of the program (of economic development) in line with PML-N’s 2013 election manifesto,” Dar added.

“The policies we have adopted have already changed the economic direction of the country and have put our economy on the road of recovery, stability and economic prosperity.”

Jeffrey Franks, who was heading the IMF mission team, in his statement said that the they had held “productive discussions” with Pakistan on economic performances listed under the EFF programme and are “encouraged by the overall progress in strengthening macroeconomic stability and output growth.”

The mission reached understandings with Pakistan on a memorandum of economic and financial policies which, upon management’s approval, would be considered by the IMF executive board in December to conclude the fourth and fifth reviews, Franks said.

“The mission reaffirms the IMF’s support to the government’s efforts to implement their economic reform efforts in improving the business climate,” Franks remarked.

The IMF though urged Pakistan to deepen structural reforms to improve competitiveness in global markets.

Giving it straight from the shoulder