Neither IS nor sympathisers present in Balochistan: Home Department

Neither IS nor sympathisers present in Balochistan: Home Department 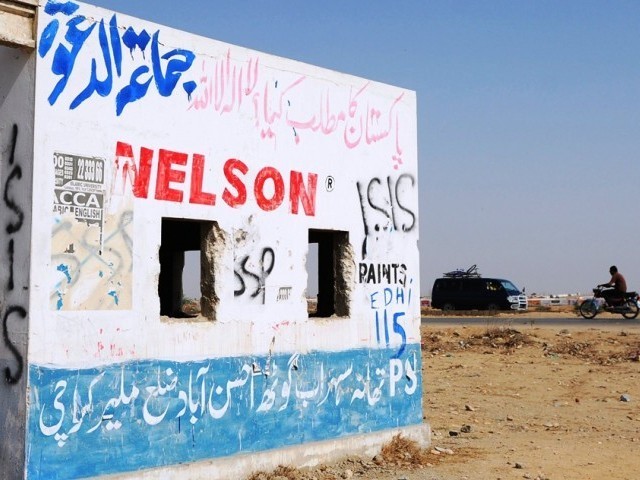 In this photograph taken on October 16, 2014 shows motorists driving past an empty police check post with graffiti which reads as ISIS along a street on the outskirts of Karachi. PHOTO: AFP

QUETTA: Balochistan Home Secretary Akbar Hussain Durrani on Saturday admitted an increase in wall-chalking with slogans in support of militant group Islamic State (IS) but denied claims of the presence of its militants on ground in the province.

“We routinely send letters regarding the activities that happen in Balochistan. Neither IS exists nor their sympathisers in Balochistan,” he added.

“There could be a few people involved in walk-chalking. This is restricted in slogans. Nothing more than that,” he added.

“The ideology of IS is based on hatred against Shias, while 99.9% of the people in Balochistan do not feel the same way. Similarly, Shias do not have the same feelings for Sunni Muslims,” he added.

Balochistan Chief Minister Dr Abdul Malik Baloch also confirmed that there is no presence of IS in Balochistan but added that like-minded people do exist in the province.

The Human Rights Commission of Pakistan in a recent fact-finding mission has voiced its concern over the growing presence of extremist groups in Balochistan, which the commission said is only meant to replace the Baloch nationalists and counter their movement.

Asma Jahangir, human rights lawyer and member of the fact-finding mission, has said that religious groups had been given space in Balochistan deliberately.

“It is the biggest concern for the HRCP,” she said, adding that it would be a grave problem. “It is ironic that no one (security agencies and security forces) is taking action against these religious groups who are consolidating their positions in Balochistan,” Jahangir added.