The day after: Bombing fails to dampen Wagah border pageantry

The day after: Bombing fails to dampen Wagah border pageantry 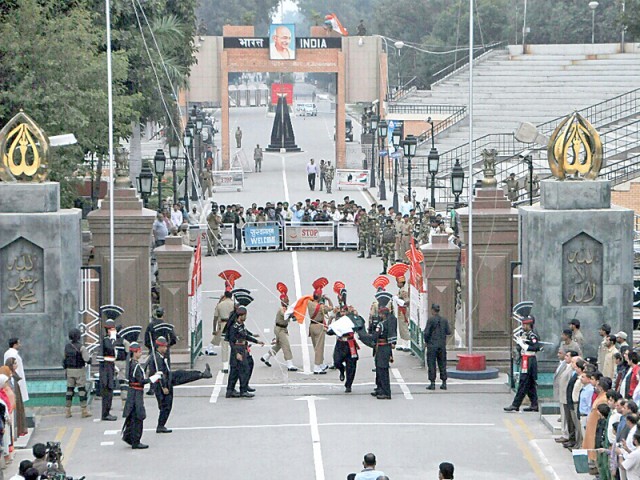 A day after a suicide bomber mowed down dozens of people at the Wagah border crossing, Pakistani and Indian border guards staged the ritual flag-lowering ceremony as investigators looked for possible leads into the deadly bombing claimed by three terrorist groups.

India’s home ministry had earlier said the daily display of military pageantry would be suspended. But later Pakistani officials changed their mind and decided to go ahead with the ritual to send a message to the militants.

Undeterred by the carnage, hundreds of visitors, women, men and children, showed up at the parade ground on the Wagah border crossing, some chanting ‘Death to terrorists’ and ‘Long live Pakistan’. On the Indian side, however, there were only a handful of spectators.

The well-choreographed colourful show, where Pakistani rangers and India’s Border Security Force personnel in elaborate uniforms goose-step, shake hands brusquely across the borderline and scowl aggressively at each other, proceeded as usual amid heightened security.

“Today’s ceremony proved that terrorists cannot lower the spirit of the nation by their cowardly activities,” said Corps Commander Lahore Lt Gen Naveed Zaman while speaking to the media after the ceremony. He added that a large number of people turned up to see the ceremony, while the Indian side looked deserted. According to the IGP Punjab Office, 56 people – including three rangers – were killed and 136 injured in Sunday’s suicide attack that took place when visitors were leaving after the ceremony at 5:40 in the evening.

The police, meanwhile, claimed that they were making headway in the probe into the bombing. According to police officials, intelligence agencies have detained two suspects from the border area. SP (Investigation) Cantonment Mustafa Hameed Malik, however, didn’t confirm any arrest.

DIG (Operations) Dr Haider Ashraf said that 25 suspects have been detained for questioning. “These people will be released after being cleared of their involvement in the attack,” he said.

Ashraf said the police were working on various leads. He said they had also found a piece of jaw, apart from an arm and a leg. “These body parts have been sent for forensic examination,” he added. He denied speculations regarding the involvement of a young man who had gone missing days ago. The boy, which agencies had earlier suspected of being the suicide bomber, had been recovered, he added.

During a search of the Wagah boarder surroundings, a suicide jacket was found some 500 metres away from the parade ground. It is suspected that there was also a second terrorist, who failed to detonate his vest. According to DIG Ashraf, the jacket was rigged with 10 kilos of explosives and ball-bearings.

According to sources, on October 30 the police had received intelligence about a possible terrorist activity at Wagah border and the information was subsequently shared with the Rangers Headquarters. DIG Dr Haider confirmed the police had received such a threat alert.  On October 31, not only a senior police official coordinated with the Rangers on the issue but a new enhanced security duty was put in place with 10 additional police personnel.

On Monday, the police received a new threat alert, which said that 15 terrorists have entered Lahore for carrying our attacks. Several places, including Bibi Pak Daman and Railway Station have been identified as potential targets.