Few of the displa­ced people had chosen to stay at govern­ment-run camps while most of them were stayin­g with relati­ves
By AFP
Published: October 31, 2014
Tweet Email 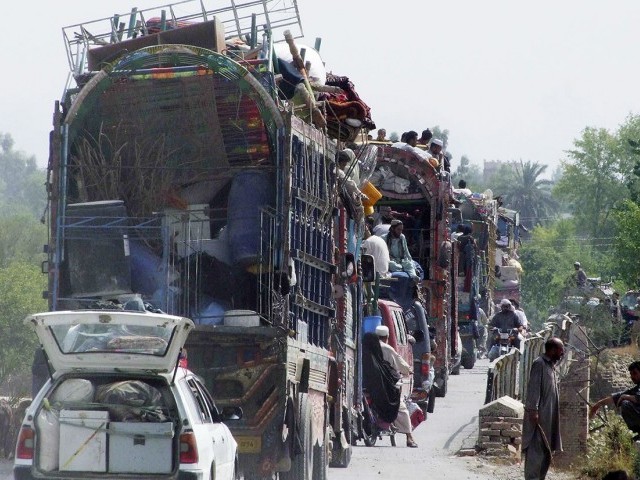 Since October 13, 171,559 people have moved from Khyber to Peshawar and Kohat. PHOTO: REUTERS

PESHAWAR: Over 150,000 people have fled from Khyber Agency after the military launched a fresh offensive against militants, officials said Friday.

Pakistan launched an operation in Khyber agency in mid-October against militants who had taken a sanctuary there after fleeing strongholds in North Waziristan where the military had launched a large-scale operation against them in mid-June.

Khan said that a few of the displaced people had chosen to stay at government-run camps while most of them were staying with relatives.

Over a million people had fled flighting in North Waziristan when the army began their offensive against militants in June, codenamed Zarb-e-Azb.

The displaced poured into nearby towns where they faced overcrowding, a lack of food rations and high rents.

The long-awaited army offensive against militant strongholds in the country’s northwest was launched in June after a brazen attack on Karachi airport ended stuttering peace talks between the government and the Taliban.

Separately, Governor of Khyber Pakhtunkhwa province Mehtab Ahmed Khan said that some 36,000 families who had fled to Afghanistan during the army operation, had returned to Pakistan.

“Targeted operations against militants are progressing successfully in tribal areas of Pakistan and on the conclusion of these operation we will honourably resettle all displaced people,” Khan said during a meeting with the elders of North Waziristan.

More than 1,100 militants and 100 soldiers have been killed since the start of the long-awaited operation against the Taliban strongholds and more than 100 militants have surrendered, according to the military.