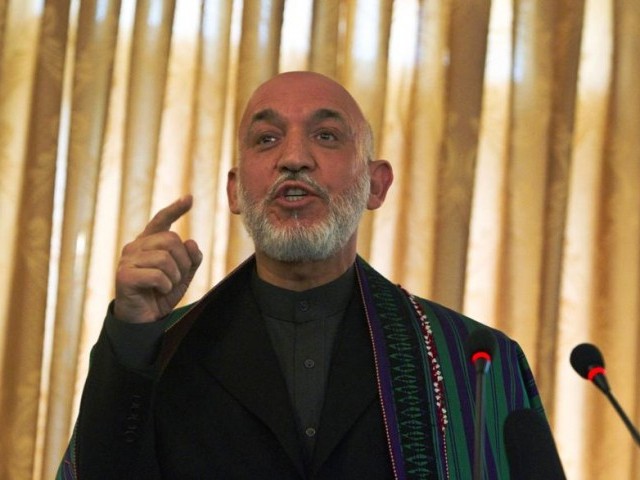 WASHINGTON: After criticising Pakistan’s anti-militant performance for years, Afghan President Hamid Karzai says he now sympathises with Pakistan, in an interview with The Washington Post. “For the initial years, I was highly critical of Pakistan and their lack of action on the [militant] sanctuaries [in Pakistan]. Now, I see Pakistan suffering more than we are in lots of ways, especially in the consequences of the violence [caused by] these sanctuaries and the militancy,” he said.

Karzai also expressed his disapproval of drone attacks conducted by the United States in Pakistan. “I don’t like guns or airplanes, so I can never talk in favourable terms about planes that are shooting people or bombing people,” said the president.

Also, he underscored Pakistan’s role in bringing lasting peace to Afghanistan, which, he claimed, “won’t come unless we address the question of sanctuaries and unless Afghanistan and Pakistan are on the best of terms as friends and neighbours and brothers, with America present with us and among us.”

Karzai voiced hope that Afghanistan, the United States and Pakistan would “do all that we can together to address the problem” of militant sanctuaries. “On the one hand, I sympathise with them and want to be closer to them and work together to address it. On the other hand, I’d like to ask them to do more on the sanctuaries and for the United States to pay closer attention to this problem,” Karzai added.

He expressed his deep scepticism of American policy in Afghanistan. “The time has come to reduce the presence of boots in Afghanistan . . . to reduce the intrusiveness into the daily Afghan life,” said Karzai, while suggesting that “the United States must reduce the visibility and intensity of its military operations and end the increased US Special Operations forces’ night raids that aggravate Afghans and could exacerbate the Taliban insurgency.”