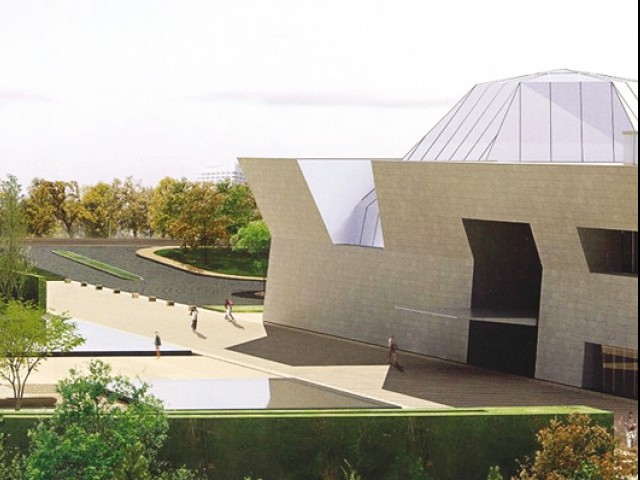 From the intricate detail on the wings of a dove-inspired incense stick holder on display, to the sheer grandeur and brilliance of the atrium and the glass dome, the Aga Khan Museum in Toronto is — to put in one word — impressive. Located on a huge swath of green space in northeast Toronto and designed by Pritzker Prize-winning architect Fumijiko Maki, it is a treasure trove of art that showcases the wealth and heritage of the Islamic world. The story of Haftvad and the worm, folio from Shahnameh of Shah Tahmasp. PHOTOS COURTESY: AGA KHAN MUSEUM

“For the 30,000-strong Ismaili community that calls Toronto home, this museum is an attempt to demystify Islam,” says a museum guide, who takes visitors on an enlightening 60-minute tour of the permanent collection comprising of more than 1,000 artifacts. Having opened its doors this year on September 18, the museum has tapped into Aga Khan’s private collection, showcasing ancient books and hand-crafted manuscripts from the Holy Quran to Shah Tahmasp’s illustrated version of Ferdowsi’s Shahnameh. An audio recording of the great epic is also recited along the alcove by the display for a complete sensory experience. This illustration is from Shah Tahmasp I’s Shahnameh showing Firdausi and the three court poets of Ghazna.

Along with state-of-the-art multimedia deployed by curators to enhance experience, the structure also makes clever use of sunlight, water and flora, to celebrate all forms of art, be it visual, verbal, written, musical or culinary. “While you can see just a few of the manuscripts on display, we have several in store as works on parchment need to be changed every three months for conservation purposes,” explains Alnoor Keshavjee, a Toronto-based doctor who also volunteers as a museum guide. To maintain the large premises, many members of the community have stepped forward to act as volunteers, dedicating countless hours to studying the collection, he says. “We took lessons from our curators just so that our patrons have a better understanding of what is displayed. So don’t be surprised as you move along to find a teacher, lawyer or a student taking time off to work in the service of the Aga Khan,” he adds. This scribe’s wooden cabinet is a rare survival and an extraordinary example of luxury woodwork production in Spain under the Nasrids (1232-1492). PHOTOS COURTESY: AGA KHAN MUSEUM

From the Near East and its individualised offshoots in North Africa to the Iranian world that stretches from modern-day Iran through Afghanistan and Central Asia and the Hindustani courts of India and Pakistan to the Muslim communities of China, everything has been covered said Henry S Kim, the director and CEO of the Aga Khan Museum  during his welcome remarks at the opening ceremony. The mandate of the museum is to educate and inspire, while illustrating the true artistic diversity of Islamic civilisations. “In my opinion, it is important to explain Islam from a cultural point of view, especially to the Western world. A brass bowl from the time of the Mamluks, who ruled Syria and Egypt between 1250 and 1517. PHOTOS COURTESY: AGA KHAN MUSEUM

We need the mainstream population to, more than ever, see this version, as opposed to what we see on a daily basis coming out of the Muslim world,” says Keshavjee, who migrated to Canada from Uganda. “This is a large part of my heritage. I am proud of it and I want to share it with you.”

An elaborately decorated metalwork pen box. Profusely decorated with precious gold and silver inlay and engraved geometric, floral and vegetal designs, this luxury pen box would have been carried by a high-ranking individual, perhaps even a ruler.  PHOTOS COURTESY: AGA KHAN MUSEUM

Upon advancing from the museum’s permanent collection to the two temporary exhibits, In Search of the Artist and The Garden of Ideas, one cannot help but notice a huge carpet hanging from the ceiling in the museum’s wide atrium. A closer inspection reveals that it is decorated with 1.2 million gold and silver pins, all of which were placed by hand. The exhibit Your Way Begins on the Other Side was commissioned by the museum and is the work of Aisha Khalid from Lahore.

While the museum has plenty of similar awe-inspiring works of art, there are a few that fail to live up to expectations. But just like art, even criticism is subjective. According to Sheeraz Wania, a Pakistani-Canadian graphic artist, who teaches design in Toronto and had visited the museum on the opening day, the manuscript collection was simply mind-blowing.

The Garden of Ideas is a contemporary art exhibit from Pakistan and is a part of the museum’s current exhibition.  PHOTOS COURTESY: AGA KHAN MUSEUM

“But then, one does not expect anything less when visiting a space that has the Aga Khan name attached to it, be it a hospital, school or, in this case, a showcase of art,” she says. Wania was, however, a bit disappointed in the Garden of Ideas exhibit, featuring the works of six internationally acclaimed Pakistani artists, including Bani Abidi, Nurjahan Akhlaq, Atif Khan, David Chalmers Alesworth, Aisha Khalid and Imran Qureshi. The artists took the theme of garden, both flora and fauna, and in the case of Imran Qureshi roses and ants, for aesthetic contemplation. But Wania felt that the primarily Lahore-based artists didn’t do quite as much justice to the Pakistani art scene as she would have preferred a diverse mix from across the country. While the museum’s structure in itself is grand, the space allocated to exhibits is comparatively quite small. “I would have, from an artist’s point of view, preferred more exhibition space. But then, that is just my personal opinion,” she says.

The ivory tusk is decorated with a hunting scene. The carving and the English silver mounts that were added in the 17th century suggest that it may have served a ceremonial role.  PHOTOS COURTESY: AGA KHAN MUSEUM

The tour of the museum and the Islamic centre should be wrapped up with a meal at the museum’s Diwan café that has a distinct middle-eastern décor and cuisine. Their Moroccan eggplant sandwich and Persian pomegranate salad is bound to transport you to North Africa and Iran whilst sitting in the heart of Canada. And transporting people to far off lands without physically leaving Toronto is perhaps the museum’s greatest achievement.