Ebola death rate up to 70 per cent: WHO

Ebola death rate up to 70 per cent: WHO

The number of cases is contin­uing to spiral in the three hardes­t-hit countr­ies, Liberi­a, Sierra Leone and Guinea­
By AFP
Published: October 14, 2014
Tweet Email 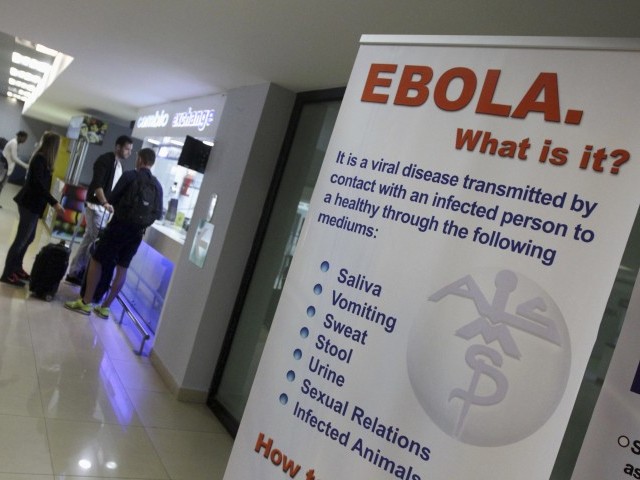 An sign explaining the symptoms of Ebola stands inside a hall for arriving passengers at the international airport in Guatemala City on October 13, 2014. PHOTO: REUTERS

GENEVA: The death rate in the Ebola epidemic raging in west Africa has reached around 70%, the World Health Organisation said Tuesday.

“What we’re finding is 70% mortality,” said Bruce Aylward, assistant director-general of the WHO.

The number of cases is continuing to spiral in the three hardest-hit countries, Liberia, Sierra Leone and Guinea.

“It could reach 5,000 to 10,000 cases per week by the first week of December,” Aylward said, though he underlined that that was just a working forecast to help guide the international fight against the virus.

“It’s been running at about a thousand cases a week now for about three to four weeks,” he told reporters in Geneva.

“The labs sometimes can’t keep up with the amount of specimens they’re getting,” he added, saying the real case-count and death toll remained unclear as a result.

The overwhelming majority of the cases are still in Liberia, Sierra Leone and Guinea, Aylward said.

On paper, that suggests a survival rate of 50 per cent, but the figures mask the true picture, he underlined.

“There are this many cases that we’re aware of, this many deaths that have been reported to us, but that doesn’t mean you divide one by the other and get how many this disease kills,” Aylward said.

“To get that number, you need to take a bunch of people, follow them right through the course of their disease, and understand how many survive. That subset of people, who we know were sick, and we know their final outcome, what we’re finding is 70 per cent mortality. It’s almost the exact same number across the three countries,” he said.

“This is a high mortality disease in any circumstance, but especially in these places where it’s happening,” he added.

The international community has stepped up its anti-Ebola fight, with the UN Mission for Ebola Emergency Response (UNMEER) launching a strategy to try to rein in the disease.

“These targets could turn the tide of the disease,” Aylward said, adding that the international community was “pushing the system hard” to reach it.

Ebola spreads via the body fluids of patients, and can even be passed on by their corpses, meaning that there have been massive efforts to stem traditional funeral rights that involve touching a body.

Aylward noted that each Ebola patient infected around two other people, on average.

“Every time you isolate another patient, every time you have a safe burial, you’re taking some of the heat out if this outbreak,” said Aylward.

“But this is Ebola. This is a horrible, unforgiving disease. You’ve got to get to zero. And what gets you down to a level of control may not be – and usually isn’t – what’s going to get you down to zero,” he said.

“We’re going to have to really put the pressure on this virus to get it to zero,” he added.

Facebook co-founder Mark Zuckerberg said Tuesday he and his wife were donating $25 million to help US efforts to contain the deadly Ebola epidemic.

“The Ebola epidemic is at a critical turning point. It has infected 8,400 people so far, but it is spreading very quickly and projections suggest it could infect one million people or more over the next several months if not addressed,” Zuckerberg said on his Facebook page.

“We need to get Ebola under control in the near term so that it doesn’t spread further and become a long-term global health crisis that we end up fighting for decades at large scale, like HIV or polio.”

He said he and his wife Priscilla were donating the funds to the US Centers for Disease Control (CDC) Foundation.

“We believe our grant is the quickest way to empower the CDC and the experts in this field to prevent this outcome,” Zuckerberg said.

“Grants like this directly help the frontline responders in their heroic work. These people are on the ground setting up care centers, training local staff, identifying Ebola cases and much more.”

The Ebola virus has already killed more than 4,000 people, most in Guinea, Liberia and Sierra Leone.

The Bill and Melinda Gates Foundation last month pledged $50 million to help boost the fight against the Ebola outbreak, providing the funds to UN agencies and international organizations involved in the outbreak.